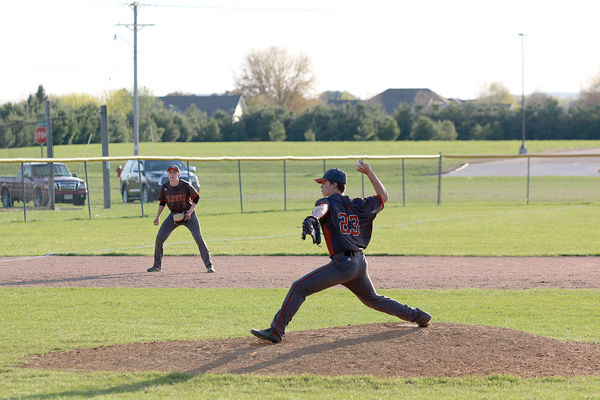 Leif Iverson throws a pitch in the seventh inning against Hayward. Iverson, one of six Bloomer players to pitch in the game, pitched .1 innings, allowing one hit and striking out one while facing four batters. 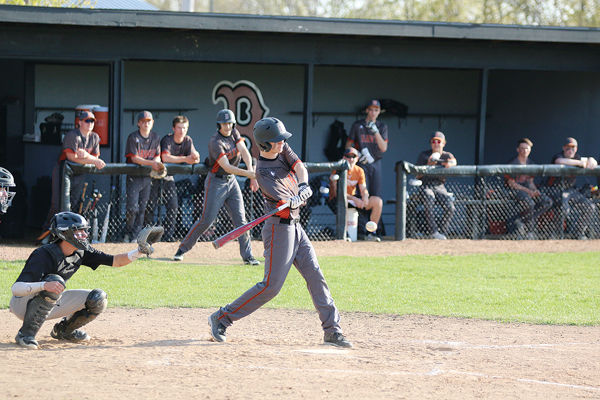 Leif Iverson throws a pitch in the seventh inning against Hayward. Iverson, one of six Bloomer players to pitch in the game, pitched .1 innings, allowing one hit and striking out one while facing four batters.

The Bloomer Blackhawks baseball team lost to the Hayward Hurricanes 12–0 on Tuesday, May 14, at Home, but beat McDonell Central 11–1 at home on Thursday, May 16. A doubleheader against Chetek-Weyerhaueser on Saturday was cancelled.

After retiring the first three Hayward batters one-two-three, Bloomer started off the bottom of the first on Tuesday with a single by Leif Iverson. Unfortunately Iverson was caught stealing second after the second pitch of the next batter for the first out. The second and third batters struck out and the inning ended. The second inning saw both teams get a player on with a single but again neither team scored. In the top of the third, two singles and two walks was enough for Hayward to put three runs on the board. Bloomer couldn’t get anything going in the bottom of the inning and Hayward lead 3–0 after three. Both teams again went scoreless in the fourth but Hayward came up with three more unanswered runs in the fifth. After a scoreless sixth inning Hayward doubled their lead with six runs to make it 12–0 going into the bottom of the seventh. The Blackhawks still couldn’t get anything to break their way and went scoreless in the seventh.

The Blackhawks had all cylinders firing on offense on Thursday, winning big over McDonell Central 11-1 in four and a half innings. Bloomer scored in all but the fourth inning.

Bloomer got on the board in the first inning when Ethan Rothbauer scored on a wild pitch. The first three batters for Bloomer in the second inning got on base by an error, a single and an error. With Lueck up fourth Connor Crane (courtesy runner for Strand) scored on a wild pitch that also advanced Jackson Simmons to third and Elijah Prill to second. Another wild pitch scored Simmons and Prill went to third. Lueck walks. Lueck stole second before Iverson hit a sacrifice fly to score Prill making it 4–0. Up next Davis singled and advanced to second on the throw and Lueck scored. The Schwab singled and advanced to second on the throw and Davis scored to make it 6–0, where it stayed at the end of the inning. After retiring the next three McDonell batters, the Blackhawks were back at the plate before the bats could cool off and the first five batters up scored. Simmons walked, Prill singled, and Lueck singled to load the bases. Iverson reached on an error that scored Simmons. Crane singled to score Prill. Macik reached on an error and Lueck scored. Schwab was hit by a pitch and Iverson scored. Finally, a sacrifice fly by Kaden Thurmond scored Crane and gave Bloomer one out. Strand flew out and Simmons struck out to end the inning with Bloomer ahead 11–0. McDonell scored one run in the fourth but couldn’t come up with anymore in the fifth and the game ended on the 10 run rule.

Schwab threw all five innings allowing only three hits and one run and striking out ten with no walks.

Bloomer (10-8, 4-8) was scheduled to play on the road with a game against Regis at Carson Park on Monday, May 20 and against Altoona in Altoona on Tuesday, May 21. Division 3 regional baseball action starts on Thursday, May 23 for Bloomer when the #2 Blackhawks take on the #7 Cameron Comets at home.

Powered by Narrative Science and GameChanger Media. Copyright 2019, contributed to this article.