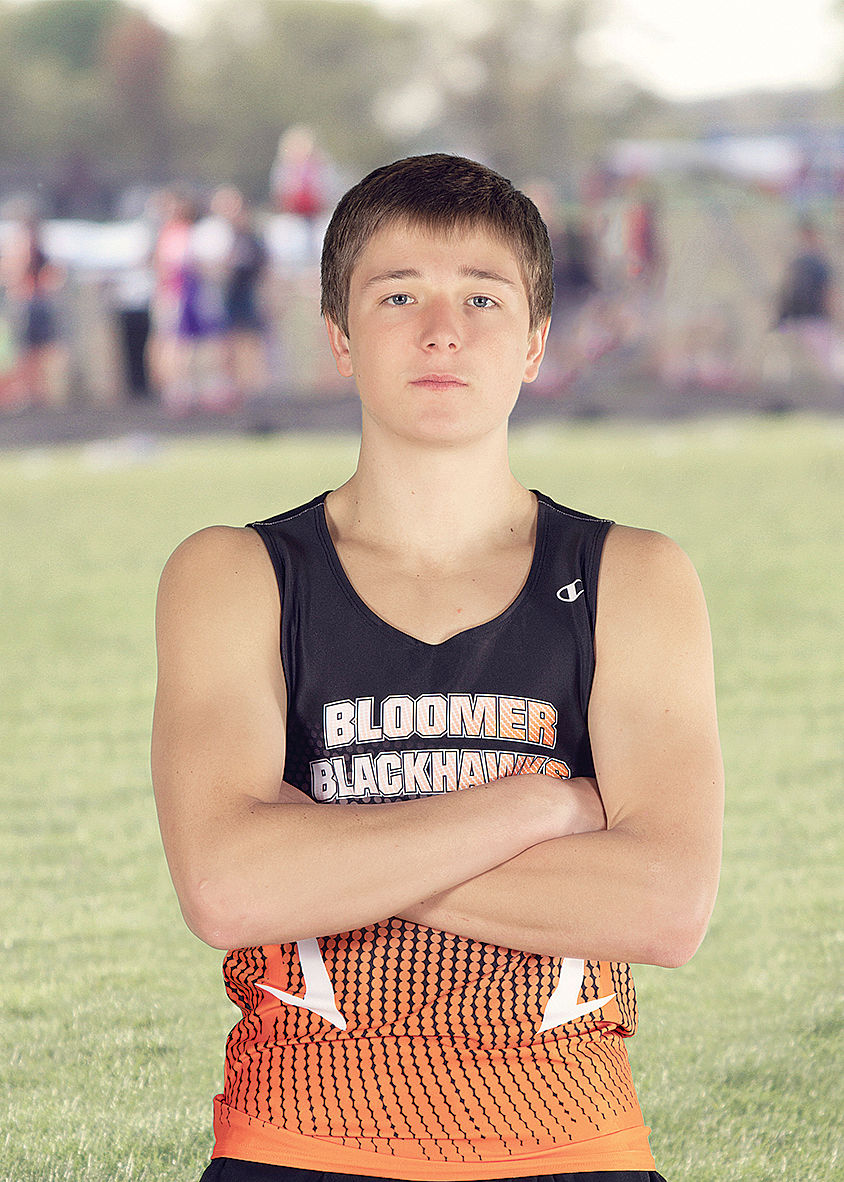 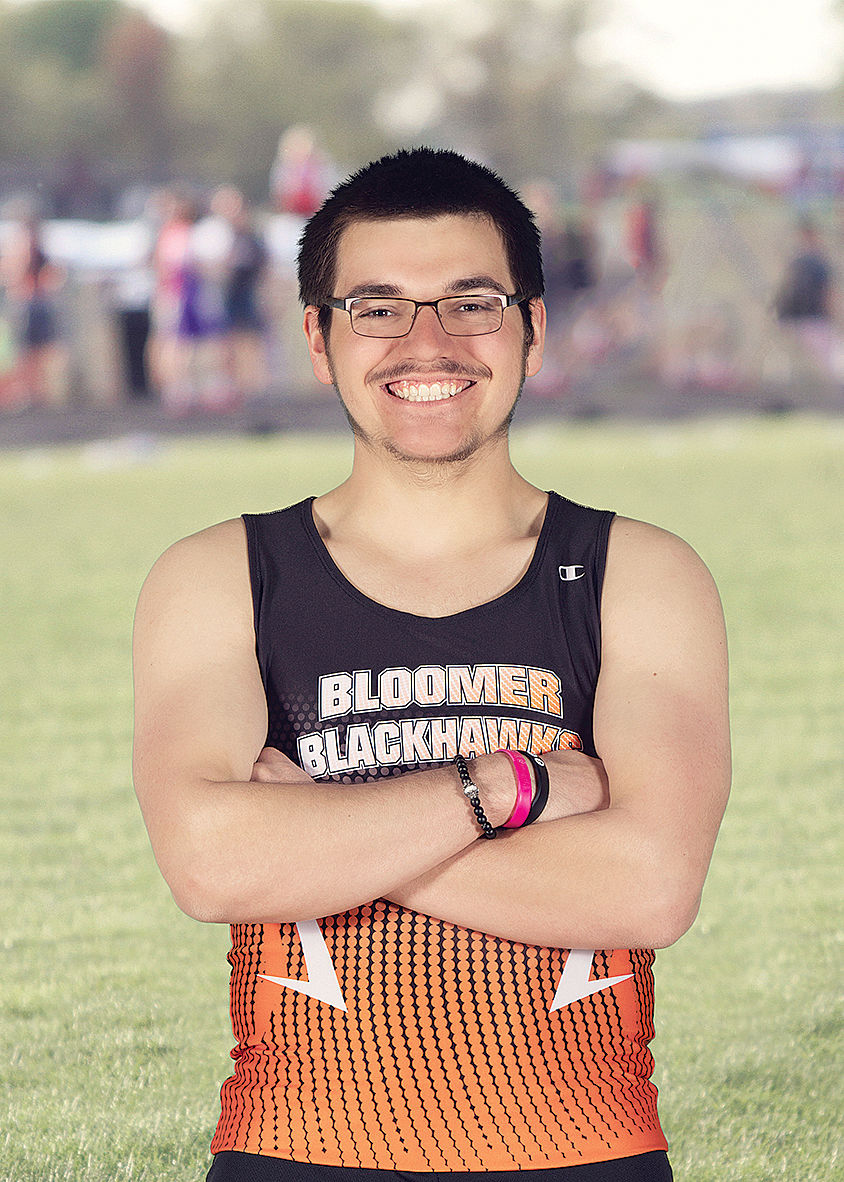 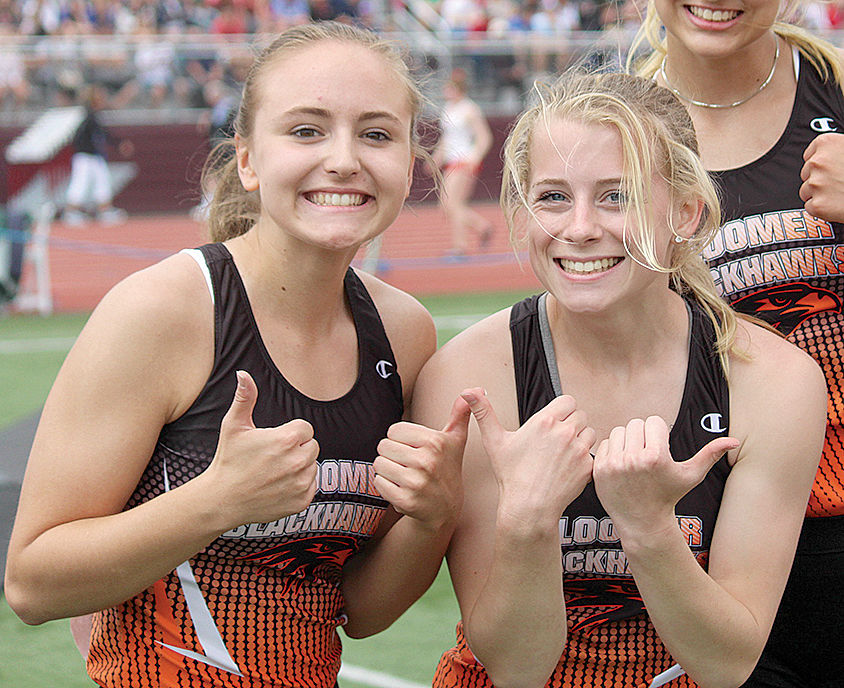 Vanessa Jenneman, left, and Maggie Sarauer give a big thumbs up after their relay team won one of their relay races at the 2019 WIAA State Track & Field meet. Jenneman and Sarauer were both on the first place 4x100 and first place 4x200 relay teams.

Senior Track athlete Vanessa Jenneman is an outstanding role model for Bloomer High School and is one of the best representatives of the Blackhawk Way!

Vanessa is one of four team track captains. She was also a team captain for varsity basketball and received All Conference recognition. Vanessa has great leadership qualities and leads by her example of a strong work ethic, compassion for others, and determination to do her best.

Vanessa is a highly regarded sprinter. In the Heart O’ North 2019 Conference meet she placed first in the 100 and 200 meter dash. She also placed second at conference in the long jump. Her highest achievements in track and field competition were participating at the State Track meet three years in a row. Last year’s state competition was the pinnacle for her and her relay teammates finishing first in the 4x100 and 4x200 relays. Vanessa and her teammates had great potential to repeat their appearance at the 2020 State meet if it had not been canceled.

Vanessa’s quote for herself is, “Success is never final, failure is never fatal. It’s courage that counts,” by John Wooden.

Vanessa will be attending the University of Oshkosh and will be an Oshkosh Titan participating in track and field.

Congratulations Vanessa for being an outstanding four year Track and Field athlete.

Senior Track athlete Maggie Sarauer is also an outstanding role model for Bloomer High School and is one of the best representatives of the Blackhawk Way!

Maggie has been a strong leader for her track team and has been voted as captain for the last two years. She has numerous accomplishments. She finished first overall for Cross Country Conference this year with a PR time of 23:56. She is a highly regarded sprinter winning various races at many track meets. She also has become an accomplished pole vaulter with a PR of 9’3” breaking the school record and finishing fifth at sectionals.

Maggie also has achieved success by making it to the State Track meet three years in a row. She is the first leg of the 2019 relay team which had the prestigious honor of standing high on the podium after finishing first in the 4x100 and 4x200.

Maggie and her teammates would have met the challenge to return to the podium at the State track meet had it not been for the disappointing cancellation due to the Coronavirus pandemic.

Maggie’s quote for herself is, “To give anything less than your best is to sacrifice the gift.”

Maggie will be attending the University of LaCrosse and will be a LaCrosse Eagle Track and Field participant.

Congratulations Maggie for being an outstanding four year Track and Field athlete.

A great example of Blake’s hard work and leadership is given by the fact he came out for Track and Field for the first time his junior year. In true testament to his character and work ethic, he was voted by his teammates to be one of the four captains for his senior season. He led by example and worked hard during practice and was willing to try any event during competitions. His main focus were the sprints (100m, 200m, and 400m) and especially being a part of the relays. Last year Blake improved substantially throughout the season and continued his training during the entire offseason. We were all excited to see how much he would have improved this season. Next year Blake is headed to University of Wisconsin–Stout for a major in Pre Veterinary. Blake’s favorite quote is, “The whole secret of a successful life is to find out what is one’s destiny to do, and then do it,” by Henry Ford.

Good Luck Blake we will miss you.

Austin is not the most vocal leader we have on the track team,but he was always willing to step in wherever he was asked to compete in a variety of events. Thur always had a smile on his face and worked hard during practice. It’s these qualities that made him voted as one of our boys’ team captains for this season. During the running events Austin competed in anything from the 100m dash to the 800m run and was a member of multiple relays. Austin’s main competitive event was the triple jump. He improved quite a bit by the end of his junior season and was excited to see if he could break the 40-foot barrier to get to the state track meet. Austin’s favorite quote is, “You don’t get what you wish for, you get what you work for.”

That quote will come in handy next year as Austin will be attending Concordia University for physical education and will be competing on their men’s basketball team.