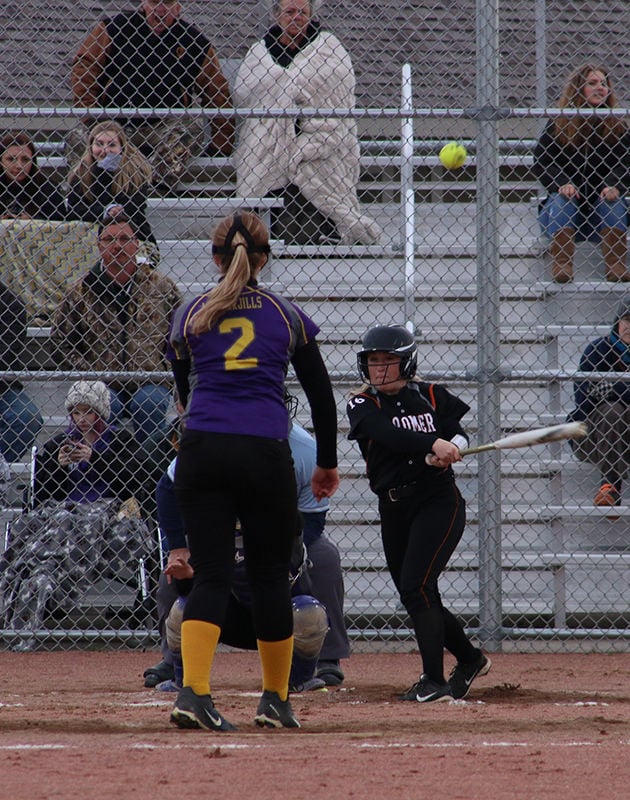 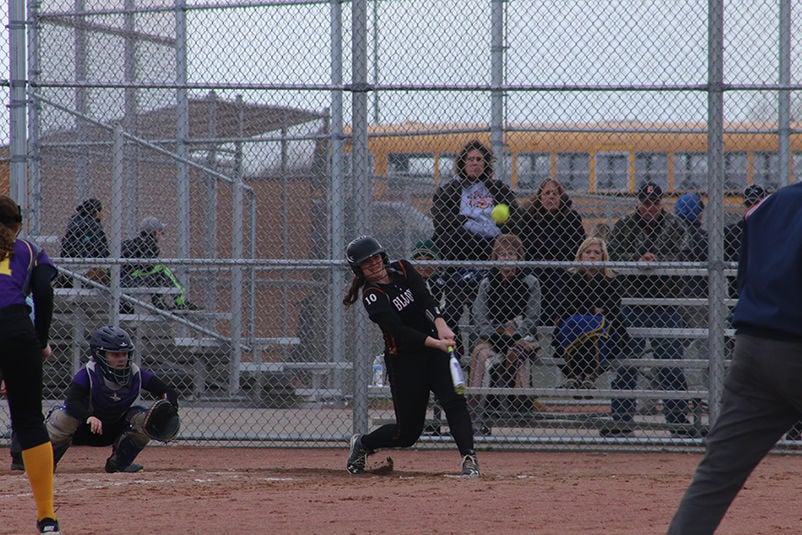 Isabella Jenneman hits a home run against Ladysmith on Thursday, May 2. Jenneman was one of two Boomer players to hit home runs in the Blackhawks 17–3 win over Ladysmith. Kenadi Poirier hit the other homer. 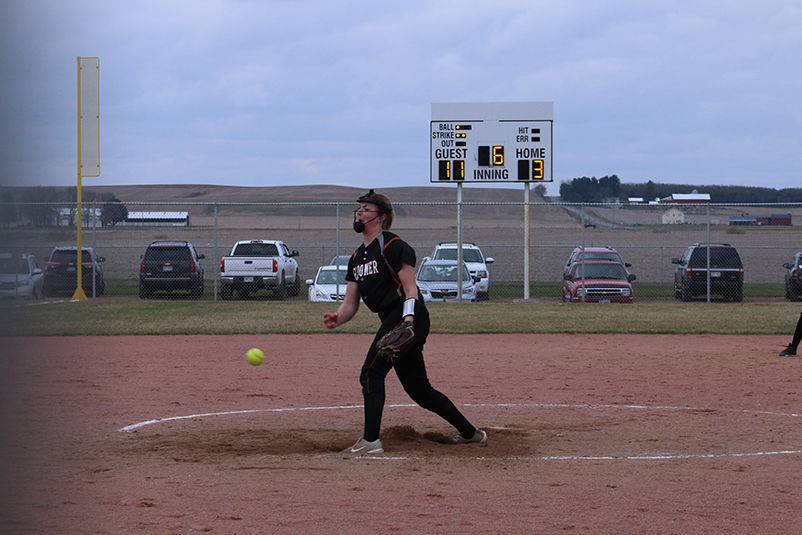 Calley Olson throws a pitch late in the game against Ladysmith on Thursday, May 2. Olson threw two shutouts last week.

The Bloomer Blackhawks softball team got in five games last week, adding three conference wins, a non-conference win and a loss to their record.

On Tuesday, April 30 at home the Blackhawks shut out Chetek–Weyerhaeuser in both games of a doubleheader 7–0 and 12–0. Bloomer went on to beat Ladysmith 17–3 on Thursday at home in a game originally scheduled to be played in Ladysmith. Then on Saturday the Blackhawks hosted a tournament that saw them beat Menomonie 16–0 before they fell to Onalaska 7–1.

Emily Kuehl threw a gem on Tuesday, April 30, for the Bloomer Blackhawks, allowing zero runs and besting Chetek-Weyerhaeuser by a score of 7-0

The Blackhawks secured the victory thanks to six runs in the sixth inning. Bloomer big bats were led by Annabelle Wittrock, Shantelle Ruf, Ashley Poirier, and Sammy Buchholtz, all knocking in runs in the inning.

Kuehl led the Bloomer Blackhawks to victory on the rubber. She went seven innings, allowing zero runs on four hits, striking out 11 and walking zero.

Kenadi Poirier went 2-for-2 at the plate to lead the Blackhawks in hits. Bloomer didn’t commit a single error in the field.

Calley Olson also threw a shutout to lead the Bloomer Blackhawks past Chetek-Weyerhaeuser 12-0 in the second game on Tuesday.

The Blackhawks scored five runs in the third inning. Bloomer offense in the inning was led by Kenadi Poirier and Sammy Buchholtz, who both drove in runs.

Olson led the Bloomer Blackhawks to victory in the circle. She lasted all five innings, allowing one hit and zero runs while striking out nine.

The Blackhawks tallied one home run on the day. Ashley Poirier had a dinger in the second inning.

Bloomer tallied 13 hits in total. Annabelle Wittrock, Poirier, Buchholtz, and Rilee Luzinski all managed multiple hits for the Blackhawks. Wittrock led the team with three hits in three at bats.

Kenadi Poirier would not be denied at the plate on Thursday, May 2, picking up four hits and leading the Bloomer Blackhawks to a 17-3 win over the Ladysmith Lumberjacks. Poirier singled in the first, singled in the fourth, homered in the sixth, and singled in the seventh.

The Blackhawks started out the day with two runs in the first but Ladysmith answered back to tie the score at 2–2. Bloomer added another run in the second inning when they scored one run when Shantelle Ruf doubled, but the Lumberjacks also scored a run in the second to make it 3–3 going into the third inning. The Blackhawks took the lead for good with one run in the third inning when Isabella Jenneman singled on the first pitch of the at bat, scoring one run.

Kuehl earned the victory in the circle for the Bloomer Blackhawks. She surrendered three runs on five hits over three innings, striking out five and walking zero. Calley Olson and Trinity Grey entered the game out of the bullpen and helped to close out the game in relief.

The Blackhawks launched two home runs on the day when both K. Poirier and Jenneman went for the long ball in the sixth inning.

Bloomer scattered 14 hits in the game. Poirier, Sammy Buchholtz, Jenneman, and Ruf all collected multiple hits for the Bloomer Blackhawks. Poirier went 4-for-5 at the plate to lead the team in hits.

Calley Olson had all the right stuff again on Saturday for the Bloomer Blackhawks, allowing zero runs and besting Menomonie by a score of 16-0.

Olson also led the Blackhawks to victory by driving in five runs. She went 3-for-4 at the plate. Olson drove in runs on a double in the first, a home run in the third, and a double in the fourth.

The Blackhawks fired up the offense in the first inning when Olson doubled on a 0-2 count, scoring two runs. They added another two in the second and one more in the third and in the fourth the Blackhawks tallied 11 runs. Sammy Buchholtz, Olson, Annabelle Wittrock, Shantelle Ruf, and Isabella Jenneman powered the big inning with RBIs.

Olson was the winning pitcher for Bloomer. She lasted all five innings, allowing three hits and zero runs while striking out six and walking zero.

Bloomer Blackhawks socked three home runs on the day. Olson went yard in the third inning. Ruf and Buchholtz went for the long ball in the fourth inning.

The Blackhawks racked up 15 hits. Olson, Buchholtz, Jenneman, Ruf, and Kenadi Poirier each collected multiple hits with Buchholtz and Olson each managing three hits to lead the team. The Bloomer Blackhawks didn’t commit a single error in the field.

The Bloomer Blackhawks fell behind early and couldn’t come back in a 7-1 loss to Onalaska on Saturday. Onalaska took the lead on a double in the first inning.

The Bloomer Blackhawks struggled to contain the high-powered offense of Onalaska, giving up seven runs.

Calley Olson took the loss for Bloomer Blackhawks. She surrendered seven runs on nine hits over five and two-thirds innings, striking out nine.

The Blackhawks smacked one home run in the game. Kenadi Poirier went for the long ball in the sixth inning.

Rilee Luzinski went 2-for-3 at the plate to lead Bloomer Blackhawks in hits.

Bloomer (12-5 8-0) is scheduled to play Hayward at home on Thursday, May 9, a doubleheader at home against Spooner on Saturday, May 11, and at Northwestern on Tuesday, May 14.

away game played in Bloomer

We inadvertently left out two games from last week’s paper. A condensed box score appears below for Bloomer’s two wins over Cumberland at Cumberland on Friday, April 26.

GameChanger.com contributed to this article. Powered by Narrative Science and GameChanger Media. Copyright 2019. All rights reserved.