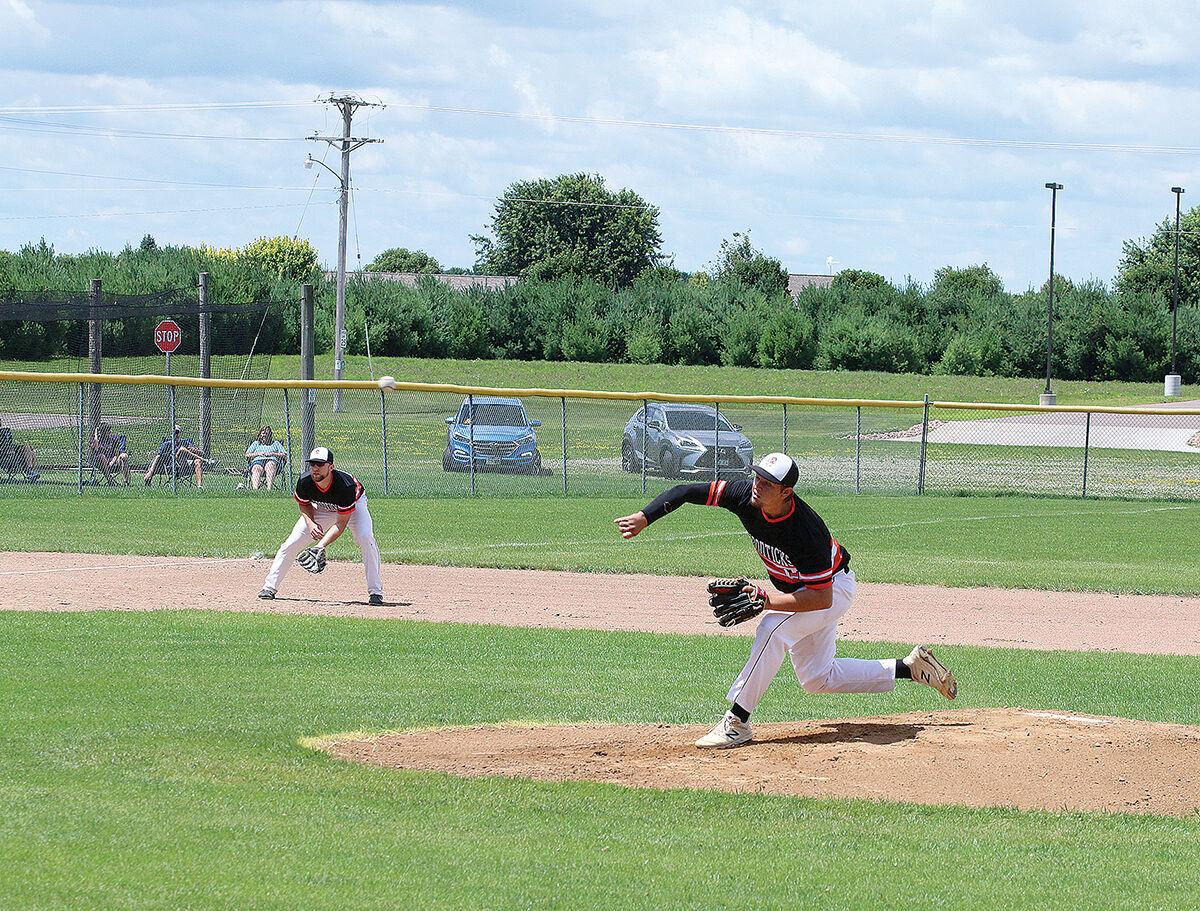 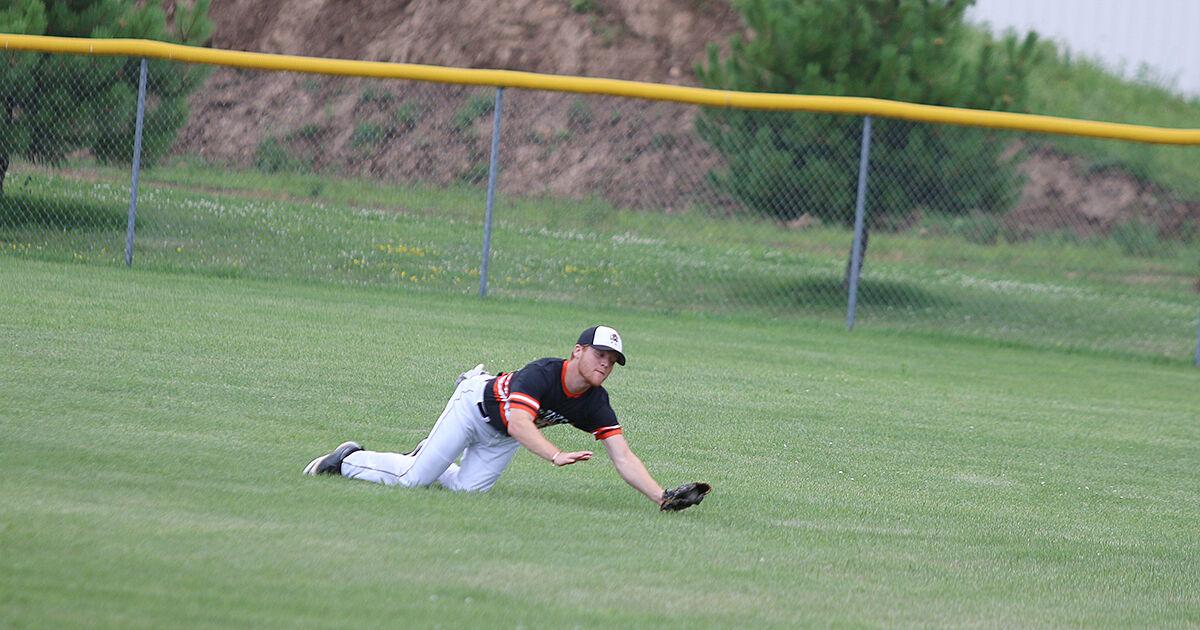 Woodticks right fielder Judd Plummer handles a line drive from R Vold of the Osseo Merchants on Sunday, July 19 for the third out in the top of the second inning.

Connor Stoik and Brett Stuckert turn a double play in the top of the second inning in the Bloomer Fightin’ Woodticks game against the Osseo Merchants on Sunday, July 19 in Bloomer. Above, after fielding a ground ball, Stoik, at shortstop, tosses the ball to second baseman Stucker who,,fires the ball towards first where it is caught by first baseman Corey Poirer for the second out.

Connor Stoik and Brett Stuckert turn a double play in the top of the second inning in the Bloomer Fightin’ Woodticks game against the Osseo Merchants on Sunday, July 19 in Bloomer. Above, Stuckert fires the ball towards first where it is caught by first baseman Corey Poirer for the second out of the double play and the inning.

The Bloomer Fightin’ Woodticks lost a couple of tough games this past week. The Woodticks were back at home on Sunday afternoon, July 19, for a game against the Osseo Merchants after playing on the road Wednesday, July 15, in Chippewa Falls against the Lumberjacks. The Merchants beat the Woodticks 7-2 and the Lumberjacks came out on top 5-4 with three runs in the bottom of the eighth.

The Osseo Merchants opened up scoring in the second inning. Tyler Sparger grounded out into a double play but still was able to knock in one run.

The Fightin’ Woodticks evened things up at one in the bottom of the second inning. An error scored one run for Bloomer.

After Osseo scored another run in the top of the ninth, Bloomer answered with one of their own. Osseo Merchants scored when Nolan Matson singled on a 2-2 count, scoring one run.

The Woodticks then answered when Leif Iverson singled on a 2-0 count, scoring one run. Matt Schley started out the inning with a single on a ground ball to shortstop. With one out in the inning Zach Gustafson went to first after being hit by a pitch. Another out brought Judd Plummer to the plate who walked to load the bases. Iverson then singled driving in Schley and advancing the runners. Unfortunately the next batter up flew out to end the inning and the game.

Todd Wienkes earned the victory on the pitcher’s mound for Osseo Merchants. He allowed five hits and one run over five innings, striking out four. Storm Standiford threw four innings in relief out of the bullpen.

The Fightin’ Woodticks tallied seven hits on the day. Iverson and Brent Sarauer both collected multiple hits for Bloomer. Sarauer and Iverson each collected two hits to lead the Woodticks.

The Osseo Merchants racked up ten hits on the day. Clause and Matson each collected multiple hits for Osseo. Clause went 3-for-5 at the plate to lead the Merchants in hits.

Wednesday’s game against the Chippewa Falls Lumberjacks was a heartbreaker for the Bloomer Fightin’ Woodticks, as they lost the lead late in a 5-4 defeat. Chippewa Falls trailed 4-2 in the bottom of the eighth inning when Matt Marthwis tripled on a 0-1 count, scoring three runs.

Chippewa Falls fired up the offense in the first inning, when Marthwis’s sac fly scored one run for the Lumberjacks.

In the top of the fourth inning, the Woodticks tied things up at two. Erik Abrahamson started the inning out for Bloomer with a single, followed by Curtis Dachel who also singled, advancing Abrahamson, to put runners at first and second. Third up, Brent Sarauer flew out to center field bringing up Tanner Linsmeyer who reached first on an error that advanced the runners and loaded the bases. Leif Iverson then singled on a line drive to right field and Abrahamson scored the Woodticks’ first run to make it 1-2. Brett Stuckert then grounded out to first on a full count and Dachel scored to tie the game at 2-2. Noah Lane struck out looking to end the inning.

In the top of the sixth Bloomer scored again when Iverson crossed the plate from second when Lane doubled on a line drive to center field with two outs. The inning ended with Bloomer leading 3-2.

After getting the Lumberjacks out one-two-three in the bottom of the sixth the Woodticks scored again in the seventh to make it 4-2.

The Jacks went scoreless in the bottom of the seventh but got the Ticks out one-two-three in the top of the eighth.

Trailing by two runs in the bottom of the eighth, Chippewa Falls loaded the bases before Marthwis came to the plate. With two outs Marthwis tripled on a fly ball to right field scoring three runs before being thrown out advancing to home to make it 5-4 in favor of the Lumberjacks.

The Lumberjacks retired the Woodticks one-two-three in the top of the eighth to end the game.

Nate Custer was the winning pitcher for the Chippewa Falls Lumberjacks. He went nine innings, allowing four runs on nine hits and striking out 11.

Dachel took the loss for the Bloomer Fightin’ Woodticks. He allowed five hits and five runs over eight innings, striking out three.