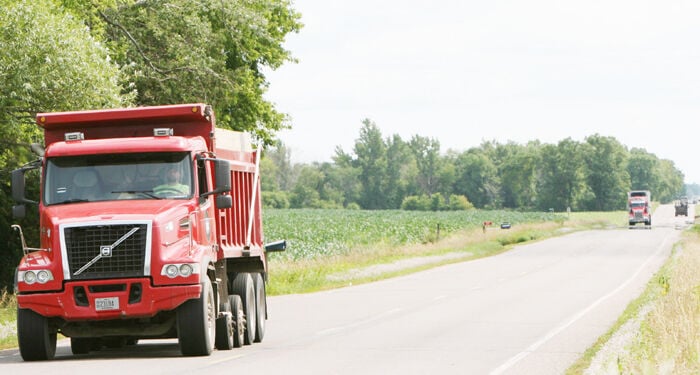 Millions of dollars in improvements were added to County Hwy. P between Almena and a sand mine and two plants in the town of Arland in order to bear the weight of sand trucks such as these, shown on Hwy. P during the summer of 2014. Photo from News-Shield archives 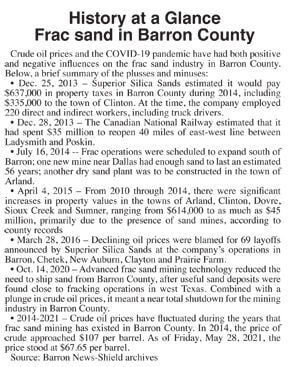 Millions of dollars in improvements were added to County Hwy. P between Almena and a sand mine and two plants in the town of Arland in order to bear the weight of sand trucks such as these, shown on Hwy. P during the summer of 2014. Photo from News-Shield archives

Municipal governments in the News-Shield circulation area have been ordered to return well over half a million dollars in property taxes to Superior Silica Sands, formerly Barron County’s largest frac sand company.

However, separate road and reclamation agreements between the county and the Superior Silica Sands (and other smaller companies) appear to be unaffected by the tax rebate, according to county officials.

Not only has the county already received funds to pay for highway maintenance and reconstruction, but Superior Silica Sands also paid a significant portion of an estimated $8 million improvement project along about eight miles of County Hwy. P between the village of Almena and a sand mine and two plants (wet and dry) owned by the sand company in the town of Arland, county records show.

In addition, funds advanced by Superior Silica Sands and other sand companies – which are already on deposit with the county – will cover the cost of reclaiming property that is (or has been) excavated for frac sand, according to county records.

The property tax decision underscores the effects that the world crude oil market has on Barron County and its municipal governments, according to News-Shield archives.

In its May 5, 2021, edition, the News-Shield reported that Superior Silica Sands reached a settlement with the Wisconsin Department of Revenue that requires four municipal governments in Barron County to return more than $579,000 in property taxes to the company, including $175,407 from the town of Clinton, $146,578 from the town of Arland, $143,319 from the village of New Auburn and $113,793 from the town of Sioux Creek.

The sand company objected to its 2019 and 2020 property assessments to the state Board of Assessors, which upheld the municipal government assessments. Superior Silica Sands then appealed to the Wisconsin Tax Commission, which awarded the tax rebate, the News-Shield reported.

Still uncertain is the total impact of the reduced assessments on other taxing bodies, such as Barron County, Northwood Technical College (formerly Wisconsin Indianhead Technical College) and local school districts.

Written agreements were made between the county and the sand companies in 2014 to cover road maintenance and improvement, according to prior newspaper stories.

For example, Superior Silica Sands agreed to pay 12 cents for every ton of sand it hauled on county roads to cover the cost of ongoing road repairs. The company payments were capped at $1.44 million annually, but would resume if the county Highway Department drew money from that fund to cover road repairs.

Superior Silica Sands agreed to resume making the 12-cent payment if the amount on deposit went below $1.44 million annually.

The agreement also called for the sand company to pay an estimated $2.35 million for improvements to the eight-mile stretch of Hwy. P used by sand trucks on their way to the Superior-owned dry sand plant near Poskin.

Mark Servi, county highway commissioner, said the county doesn’t have any shortages of funds from Superior Silica Sands, either from the annual tonnage charge or the improvements to Hwy. P.

On Thursday, May 27, he said no sand company has any outstanding obligations to cover the agreements it signed, to help pay the cost of maintenance (annual tonnage costs) and construction (to widen and/or strengthen county roads to accommodate truck shipments).

In addition, Superior Silica Sands covered much of the estimated $8 million cost of improving Hwy. P in a separate agreement with highway contractors, Servi added.

“That ($8 million figure) was an estimate of the total project costs, including design,” he said.

“We really do not know how much was actually invested, because the agreement was for the sand company to contract directly with the grading contractor to perform all the grading work.”

The county paved the road (and was reimbursed), but the Highway Department “has no record of what the contractor was paid for the grading portion of the project,” Servi added. “We were not involved in the payments to (for grading costs); it was directly between the sand company and the contractor.”

Six frac sand companies have existing agreements with Barron County spelling out how they will reclaim mined property after operations cease, according to David Gifford, county land services director.

Those companies include Superior Silica Sands, Sioux Creek Silica, Smart Sands, Piranha, Source Energy and EOG. All six companies have fulfilled their financial obligations covered by the reclamation agreements, and the companies have posted bonds to cover the cost of reclamation, he added.