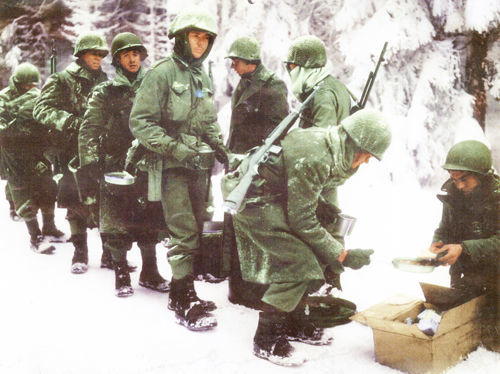 Virgil Johnson, of Clear Lake, kneels at far right in this combat photo taken during the Battle of the Bulge, which began 75 years ago on Dec. 16, 1944. Johnson, who passed away in 2014 at age 89, told the News-Shield that the photo was taken in January 1945, “somewhere in the Ardennes Forest,” near the border of Belgium and Luxemburg. Photo from News-Shield archives 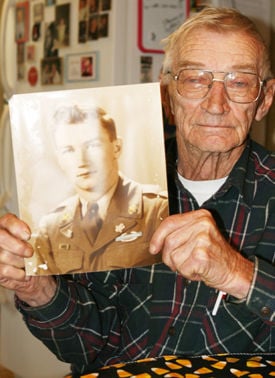 The late Virgil Johnson, of Clear Lake, holds a photo of himself as a young draftee, taken in summer 1944. Photo from News-Shield archives. 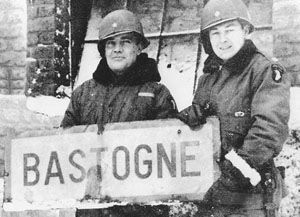 Virgil Johnson, of Clear Lake, kneels at far right in this combat photo taken during the Battle of the Bulge, which began 75 years ago on Dec. 16, 1944. Johnson, who passed away in 2014 at age 89, told the News-Shield that the photo was taken in January 1945, “somewhere in the Ardennes Forest,” near the border of Belgium and Luxemburg. Photo from News-Shield archives

The late Virgil Johnson, of Clear Lake, holds a photo of himself as a young draftee, taken in summer 1944. Photo from News-Shield archives.

On Dec. 21, 1944, German Gen. Heinrich von Luttwitz asked for a truce as his Wehrmacht armored division surrounded the Belgian village of Bastogne.

A key crossroads in an action later to be known as the Battle of the Bulge, Bastogne was held by the 101st Airborne Division, an American unit that had been resting and re-equipping about 100 miles away in France before it was rushed to Bastogne – just in time to slow the German advance.

Luttwitz sent an English-speaking officer into Bastogne to demand that the Americans surrender.

The message was delivered to Brigadier Gen. Anthony C. McAuliffe by his chief of staff, Lt. Col. Ned D. Moore.

“They want you to surrender,” Moore told McAuliffe.

“Aw, nuts!” the general exclaimed. He was trying to think of an apt reply when another staff member. Lt. Col. Harry Kinnard, said, “that first crack you made would be hard to beat.”

“What was that?” McAuliffe asked.

McAuliffe grabbed a pen and wrote what has become one of the most quoted messages in U.S. military history.

Three quarters of a century ago today, Christmas in Bastogne was nothing to celebrate. It marked the second of two brief German penetrations into the village. Lucky for the Americans, the sky had cleared (for the first time in a week) allowing supplies to be air-dropped to the 101st and other units trying to hold on.

Few, if any, people are left in the News-Shield circulation area who remember that Christmas, 75 years ago today.

One of those who did was the late Virgil Johnson, of Clear Lake. In an interview published seven years ago, Johnson recalled serving in D-Company, 347th Regiment, 87th Infantry Division, on the Siegfried Line, about 90 miles south of Bastogne.

He was among the thousands of U.S. soldiers pulled out of the combat line by Patton and sent north to help shore up the American positions near Bastogne.

“All the signs were down, and we moved at night,” he said. “I had no idea where we were. All I know is I was in combat – three battle stars.”

Johnson, who was 87 at the time of the interview, and who still worked as a truck driver, was among the hundreds of thousands of American soldiers, sailors, Marines and aviators later popularized by NBC broadcaster and author Tom Brokaw as “The Greatest Generation.”

But he was just 19 years old when he was drafted shortly after D-Day in summer 1944.

“They deferred me for quite awhile,” said Johnson, who hauled milk for the Range Creamery, formerly located west of Turtle Lake. “I was a good milk hauler, could fix almost anything, and that got me deferred thanks to the (local) creamery board.”

After undergoing 17 weeks of training in Spartanburg, S.C., Johnson was sent overseas on a troop convoy. His unit joined the 3rd Army in fall 1944, as it moved east through France.

According to the divisional history, Johnson’s regiment would spend another two weeks in combat in and around Jenneville, as the Americans slowly pushed the Germans back toward the border of Germany and Luxemburg.

What does The Bulge mean

According to Associated Press, it still means something to those who were there to witness it.

In a recent AP report, 86-year-old Marcel Schmetz, of Belgium, recalled watching trucks hauling the bodies of American soldiers from the front lines.

He and his wife, Mathilde, have converted part of their home into “Remember Museum,” which was a popular destination for visitors during the second week of December 2019.

AP reported Marcel and Mathilde shared “coffee and cake -- and often a nip of something stronger – with” their visitors -- including Arthur Jacobson, now 95, who served as a Bazooka operator in the Bulge.

The sacrifices made that Christmas, 75 years ago, may still be paying dividends today. Even in a world divided by mistrust and political differences, there is no military conflict at present that remotely compares to the scope and horror of World War II. And, in many areas of the world, words have taken the place of bullets.

According to AP, officials from the European Union went to Bastogne Dec. 16 to mark the anniversary of the start of the battle.

“Germany is now an ally of the United States and its wartime partners, united in the NATO alliance,” the wire service noted. “During the poignant ceremonies under leaden skies and rain at the star-shaped Mardasson memorial in Bastogne, the current discord between the United States and several European allies over trade and security were never mentioned.”