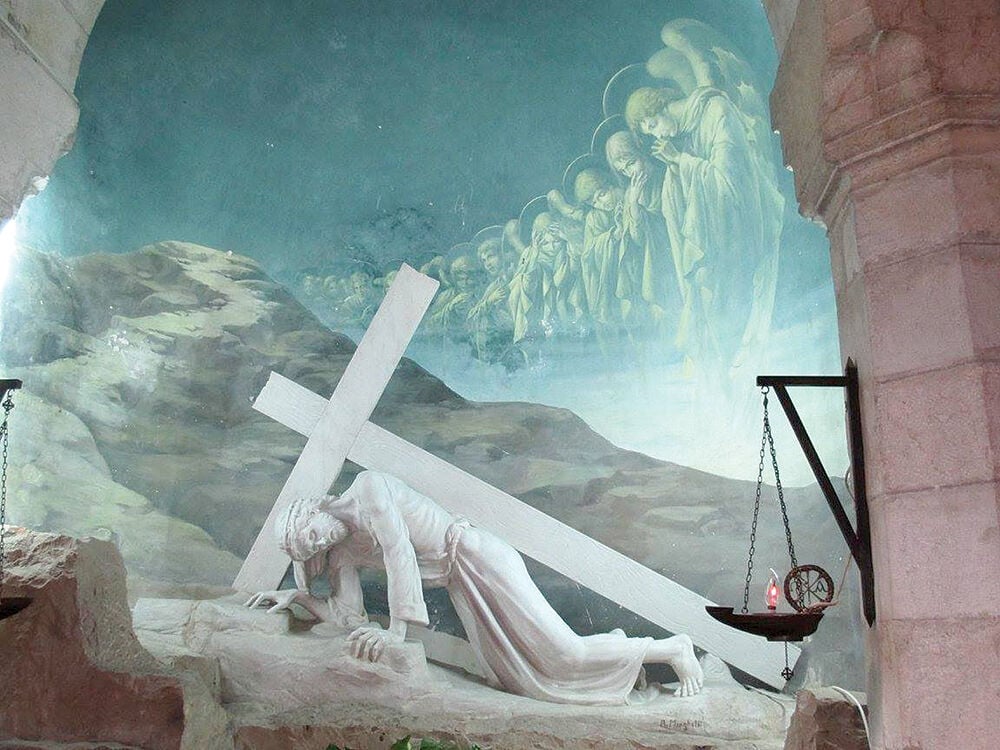 Inside the chapel of the third Station on the Way of the Cross where Jesus fell the first time. 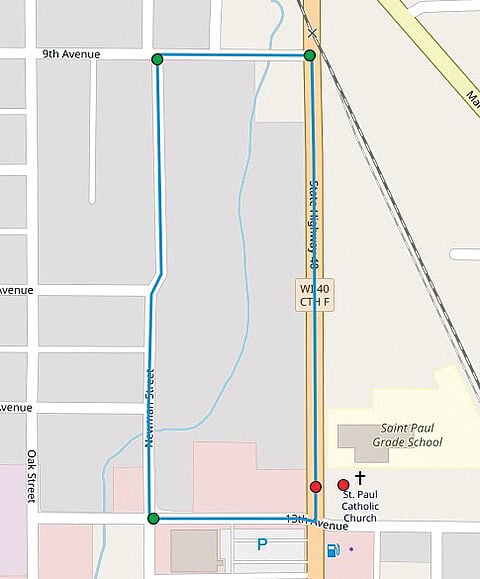 Directions for Bloomer’s Stations of the Cross

1.Begin at the First Station located in front of St. Paul’s Catholic School

4.Take the next left south down Newman Street

5.Then turn left onto 13th Avenue. This will lead you to the final, Fourteenth Station in front of St. Paul’s Catholic Church. 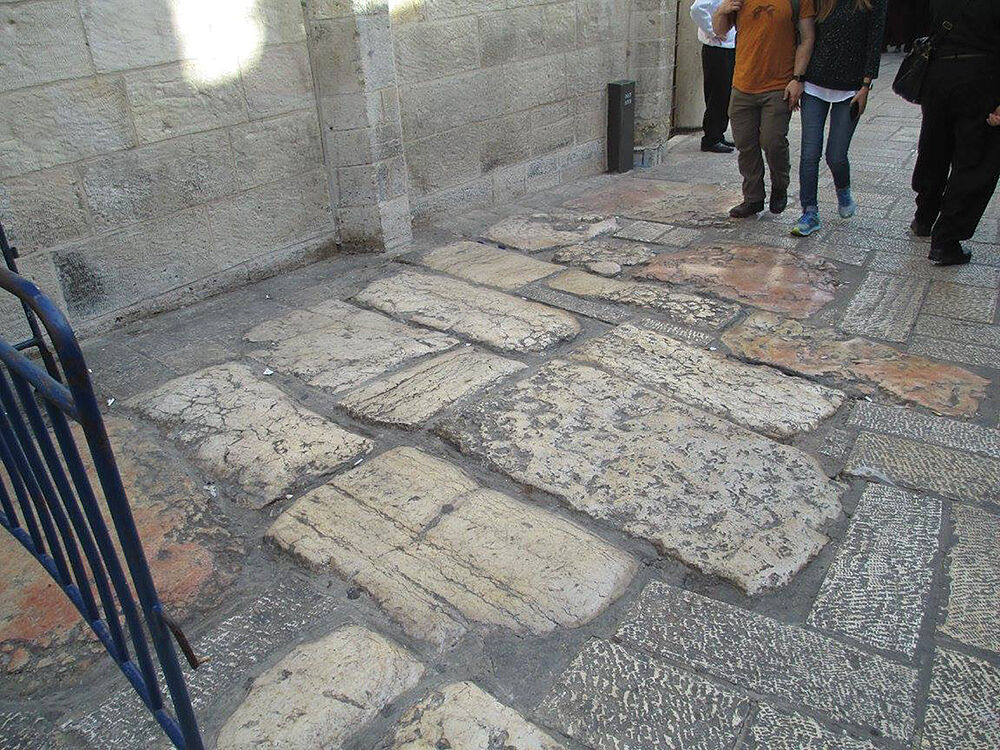 These pavement stones on the Way of the Cross beside the Chapel of the third station date from the 1st century BC or AD. 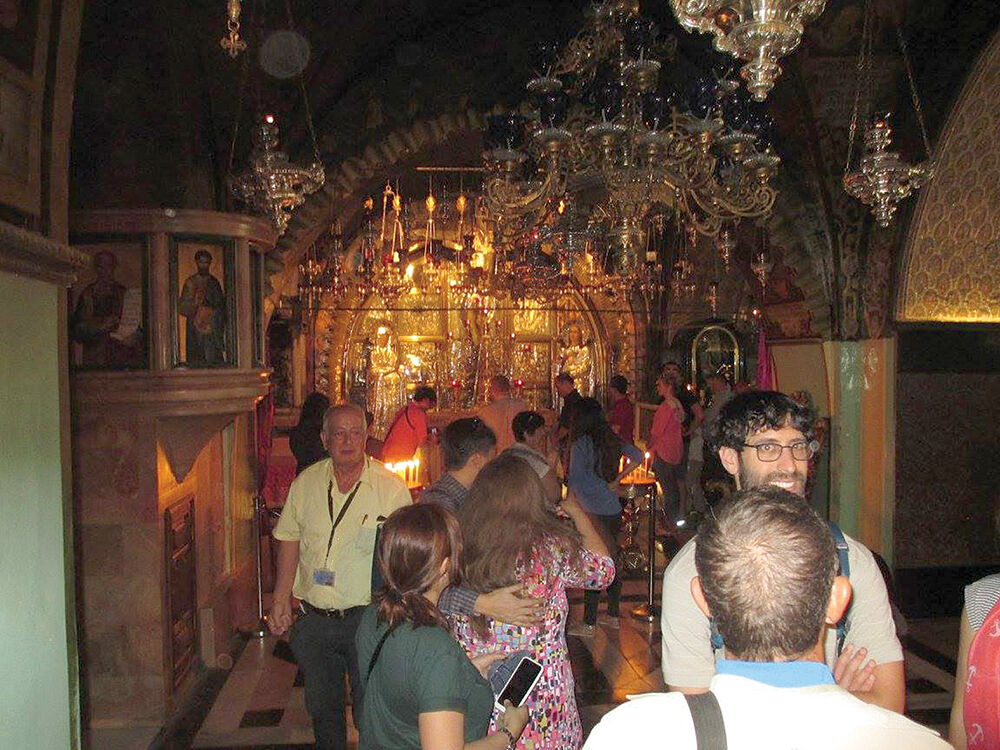 Pilgrims and tourists before the altar upon the rock of Golgotha or Calvary in the Church of the Holy Sepulchre. 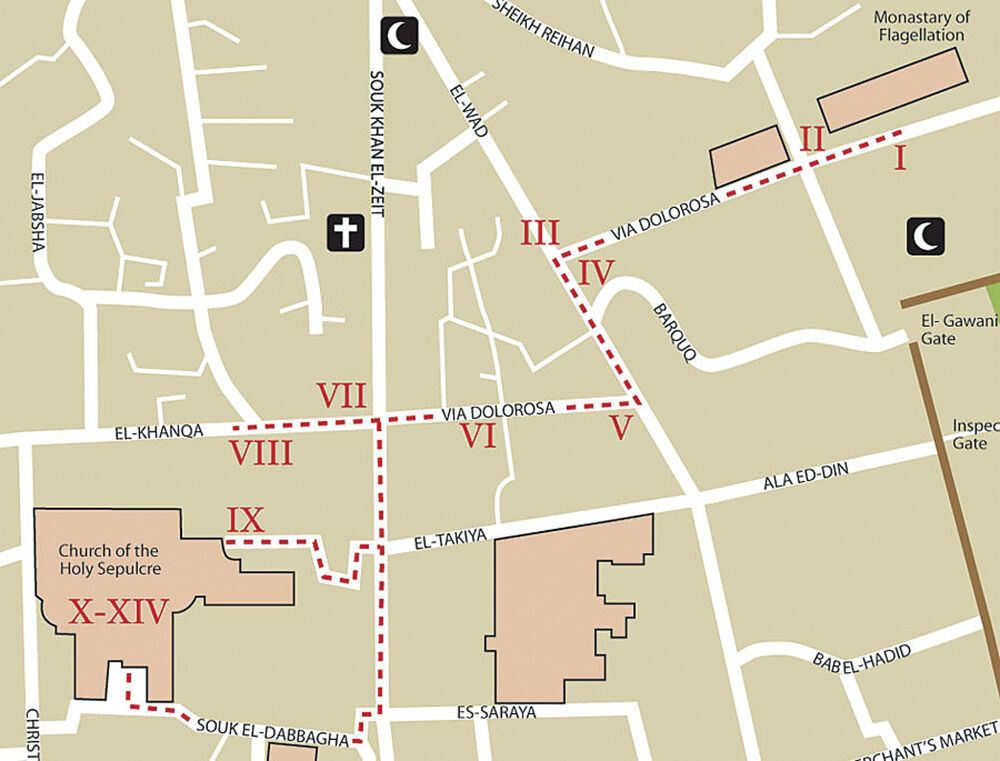 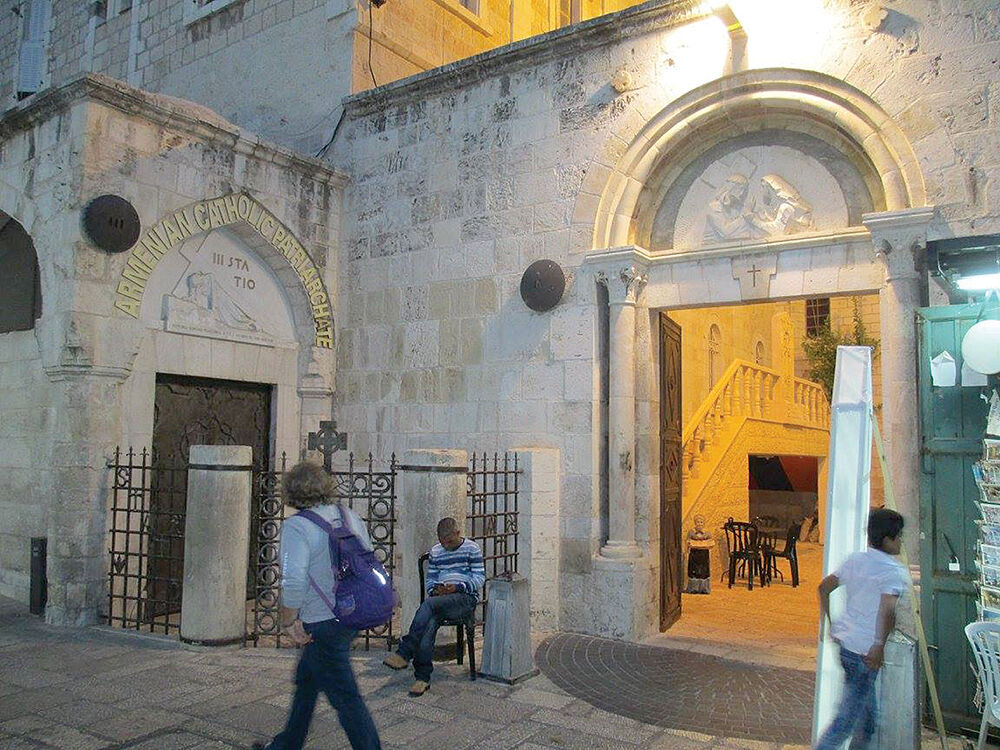 Recall Mel Gibson’s Passion of the Christ when Jesus falls the first time and Mary rushes to his side; here’s the third and fourth stations, marked by round Roman numeral shields. 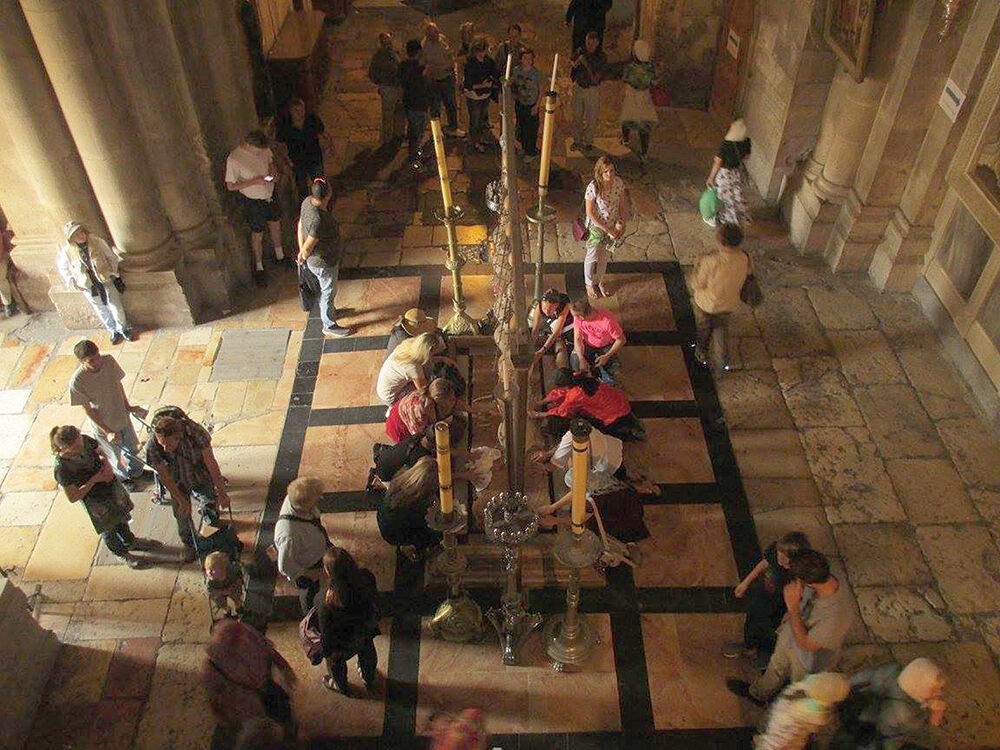 The slab inside the Church of the Holy Sepulchre below the rock of Calvary on which Jesus’ body was prepared for burial.

The experience of visiting the Holy Land, as I did in 2016, leaves lasting impressions.

One is a deepened sense that the Gospel stories were not “once upon a time” but events in a real time and place.

Another takeaway is a better sense of the region’s scale—which is smaller than you would expect. The nation of Israel is just seven times larger than Chippewa County, and the City of Bloomer is eight times larger than the area enclosed by the walls of Jerusalem’s Old City (0.35 square miles).

The Way of the Cross from where Governor Pilate sentenced Jesus to death to the site of Christ’s death and burial is less than half a mile. In the Holy Land I learned that Christian tradition has not only preserved details surrounding Jesus’ Passion (such as his three falls and St. Veronica’s veil) but also celebrates where these things occurred.

Today, these 14 Stations of the Cross are marked and venerated and prayerfully walked by pilgrims in Jerusalem today. It is a powerful and beautiful experience that parishioners of St. Paul’s Catholic Church and I wanted to somewhat recreate for people in the streets of Bloomer.

This Lent, we invite you to experience these outdoor Stations of the Cross anytime between now and Easter Sunday. The path begins with the First Station located in front of St. Paul’s Catholic School. Walk north on Main Street, turn left onto 9th Avenue, take the next left south down Newman Street, and then turn left onto 13th Avenue. This will lead you to the final, Fourteenth Station in front of St. Paul’s Catholic Church.

This 0.6 mile walk around the block takes just 12 minutes (without pausing to pray) and approximates the actual Way of the Cross in both its length and its distances between Stations.

You will notice that our last five Stations, commemorating Jesus’ crucifixion and burial, are grouped closely together near the end. This is because Jesus’ Cross and Tomb were only about 150 feet away from each other. Both sites are now housed within the Church of the Holy Sepulchre.

On Good Friday, the soldiers had led Jesus west outside of Jerusalem to a white limestone quarry nearby. St. John’s Gospel records that many people read the sign posted above our Lord’s head on the Cross showing the “crime” for which he was condemned (“Jesus the Nazorean, the King of the Jews”) because the place where he was crucified was near the city. It was also apparently alongside a road since St. Matthew notes “those who passed by hurled insults at him.” Christ was crucified atop a rock formation there called Golgotha in Hebrew and Calvary in Latin, which laborers had cut around and left behind. As Psalm 118:22 had foretold, “the stone which the builders rejected has become the cornerstone.”

The new tomb which St. Joseph of Arimathea gifted to Jesus had been cut into a rock face in a garden nearby. Halfway between these two places, the Church of the Holy Sepulchre displays a stone venerated as the slab upon which Jesus’ body was prepared by his mother and friends for burial. By accompanying Jesus Christ through his sufferings this Lent may you come to share more greatly in the joy and graces of his Easter Resurrection.