Bloomer Fire Department’s aerial fire truck, pictured above, sprays water on a turkey shed on fire on Friday evening, May 15. The turkey farm is about 5 miles northeast of New Auburn.

Bloomer Fire Department’s aerial fire truck, pictured above, sprays water on a turkey shed on fire on Friday evening, May 15. The turkey farm is about 5 miles northeast of New Auburn. 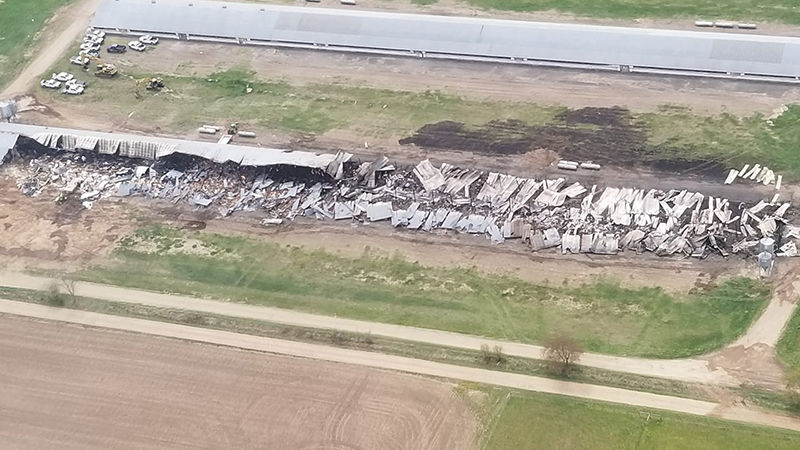 This 700-foot long turkey barn was destroyed by a fire and is viewed from the air the following day, Saturday, May 16. The fire started on the west side, pictured right. See article and additional photo on the front page for more information.

The turkey farm, owned by Jennie-O, is about five miles northeast of New Auburn on CTH F at the intersection of 280th Avenue and 90th Street. The northernmost barn was on fire.

The entire west end was completely involved in the fire when firefighters first arrived on scene, Bischel said on Monday, May 18. The fire spread and damaged much of the rest of the 700-foot-long building.

The size of the building created a challenge for firefighters, but having a good response from the departments that were called helped with controlling and subduing the fire, Bischel said. Firefighters were there for seven hours, he added.

Bischel said there were no injuries and damage was limited to just that structure. The cause was undetermined as of Monday.

There were turkeys inside the barn at the time of the fire, according to a source familiar with the matter.

A message was sent Monday afternoon to Hormel Inc., which owns Jennie-O, but a reply was not received as of press time.