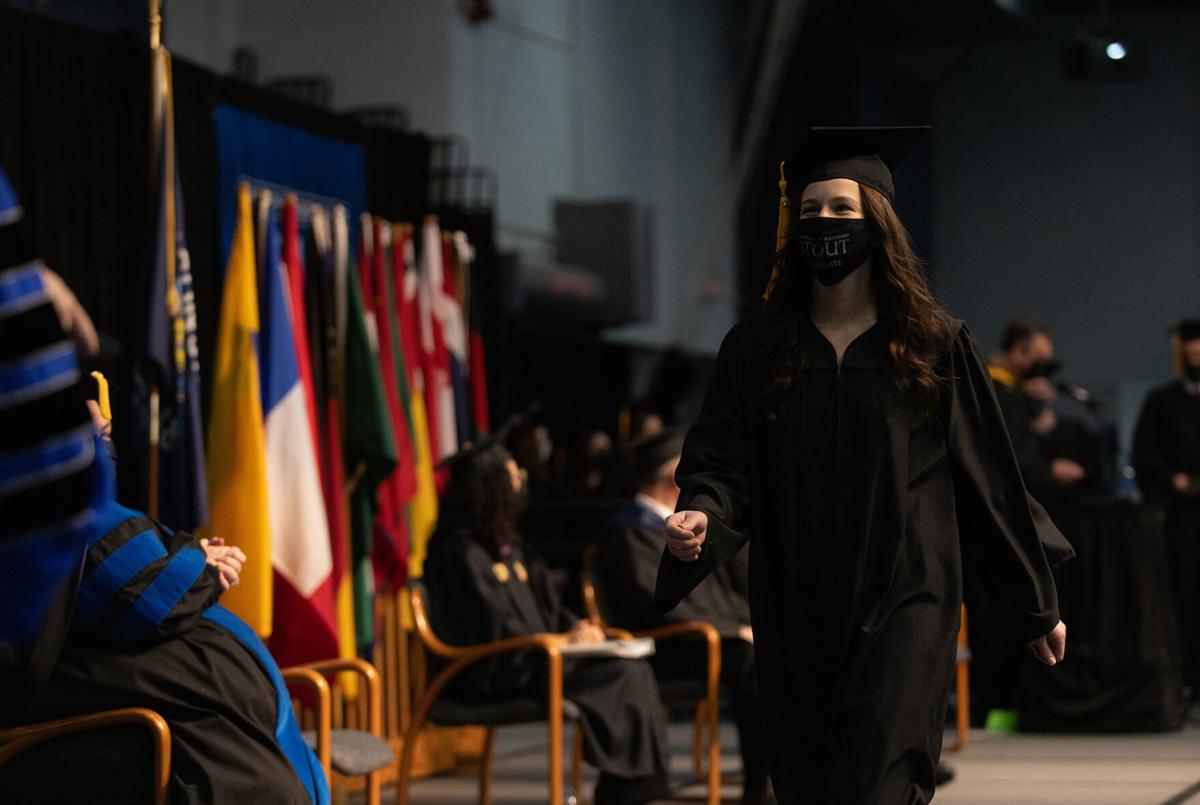 Heather Dietsche, of Bloomer, Crosses the commencement stage Dec. 18, 2021, at UW-Stout to receive her bachelor's degree in plastics engineering. 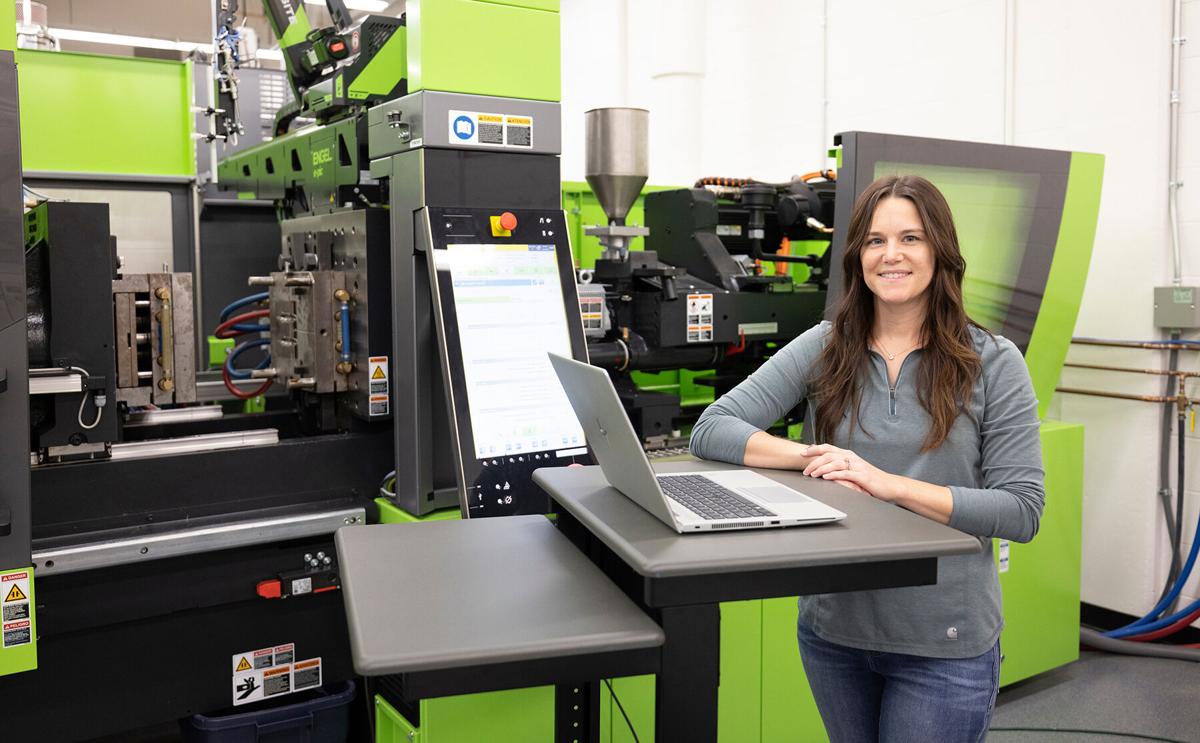 Heather Dietsche, works in the plastics lab at UW-Stout, where she returned to college at age 27.

Menomonie, Wis. — If there was a meter for measuring joy, it likely would have gone to the highest level in Heather Dietsche’s family when she crossed the commencement stage Dec. 18 at University of Wisconsin-Stout to receive her diploma.

Joy swelled up in her cheering section—son, Ariston Schneider, and her parents, in addition to husband, Aaron Dietsche, watching the livestream—as Heather took the final steps in what at times was a whirlwind journey. And joy filled her heart as she realized that she had changed the course of her life.

In 2018, she was a 27-year-old single mom working two jobs without a set career path and returning to school for the first time in five years. After completing a degree in plastics engineering, Heather, from Bloomer, will start a full-time job in January as an engineer at Phillips-Medisize in Menomonie.

Not only was she the first in her family to earn a college degree, she succeeded while helping her young son through virtual learning during the pandemic. Plus, getting married soon after enrolling at UW-Stout, she has helped her husband get through a major health challenge.

Heather found the strength to persevere, maybe because along the way she began to see a bigger picture.

“I am most proud of being the first person in my family to earn a bachelor’s degree and that my son was able to see what I have accomplished,” she said. “It only takes one generation to change the trajectory of the generations that come after, and I hope my son is encouraged by my accomplishments.”

He has noticed. When she crossed the stage, she heard a proud Ariston yell, “That’s my mommy!”

Plastics Professor Adam Kramschuster witnessed a student the past 3.5 years who was determined to learn and succeed.

“Heather’s work background and work ethic made her a pleasure to have in class, and she was eager to learn and a very active participant in every aspect of class,” he said. “I suspect this was due to her working in the field (with co-ops) while going to school and understanding the need to learn as much as possible so she could directly apply it to her career.”

Heather faced four distinct challenges and conquered each one.

The first was deciding to go back to school. She had studied business management at UW-Eau Claire but decided it wasn’t what she wanted. While working two jobs to meet expenses, a friend one day challenged her to run a half-marathon, which she did and completed.

“I didn’t have very much confidence in myself. That accomplishment gave me a huge boost in confidence, and I realized that I had a higher potential,” she said, adding that Aaron, her fiancé at the time, also encouraged her to return to school.

The second challenge was getting back into the classroom and taking a rigorous science- and math-based program.

“I had about nine years between calculus 1 and calculus 2, so I made sure to get a tutor to help me get back on track. While this was challenging, I began to feel more comfortable with my coursework as time went on,” Heather said.

The third challenge was the pandemic.

Heather suddenly had to help her son, in elementary school, learn virtually and had to take some of her own classes online. “My son got to sit in on meetings with my classmates, who (became) very used to seeing him on Microsoft Teams,” she said.

At the same time, Heather had a cooperative education experience, the first of several. “I was teacher, parent, student and employee all at once,” she said. “There were many nights when I studied until 1 a.m. and woke up by 5 a.m. to study more and get my son to day care before going to class.”

A fourth challenge arose when Aaron, a farmer, suddenly became ill. He was diagnosed in 2020 with a rare muscle disease that left him unable to walk more than 10 feet. He was hospitalized for a time, and when he returned home he needed help with a feeding tube for four months. Heather was working a co-op position at the time at Nolato Contour in Baldwin.

“Every morning I spent about an hour feeding him, drove an hour to work, worked my eight-hour shift, returned home to work on schoolwork and then spent about another hour and a half feeding him and giving him his medication,” she said. “This time in my college career was a blur. I didn’t have time to even think about how dire the situation was, which was the only good thing about having that much on my plate.”

About 1.5 years since the diagnosis, Aaron continues to make progress but was unable to attend the commencement ceremony, Heather said.

UW-Stout quickly became her home away from home as she got to know those who surrounded her. “I’m so thankful to my classmates and professors who I shared my situation with. They supported me in any way they could,” she said.

Everything, somehow, came together despite the expected and unexpected challenges.

“Stout has been a positive and supportive environment for me to earn an engineering degree. I was usually one of about three women in my engineering classes, if not the only one. This can be intimidating at first, but I quickly learned that I was not going to be treated differently for that.

“I was comfortable raising my hand in class and working with my classmates out of class. I was surprised to find many older students like me attending Stout, which was encouraging. Being a nontraditional student is more common than most people think, especially at Stout. My education from Stout has changed my career outlook, which already has a promising start,” Heather said.

“I feel 100 percent prepared to work in a manufacturing environment,” she said, citing the co-op program that gave her 2.5 years of experience in the field and courses that have given her a “solid foundation to transfer my knowledge and skills to a professional position.”

UW-Stout is Wisconsin’s Polytechnic University, with a focus on applied learning, collaboration with business and industry, and career outcomes.

What is your favorite winter activity?

Winter in Wisconsin is full of snow and cold weather. Winter also allows us to do many different activities. What is your favorite winter activity?