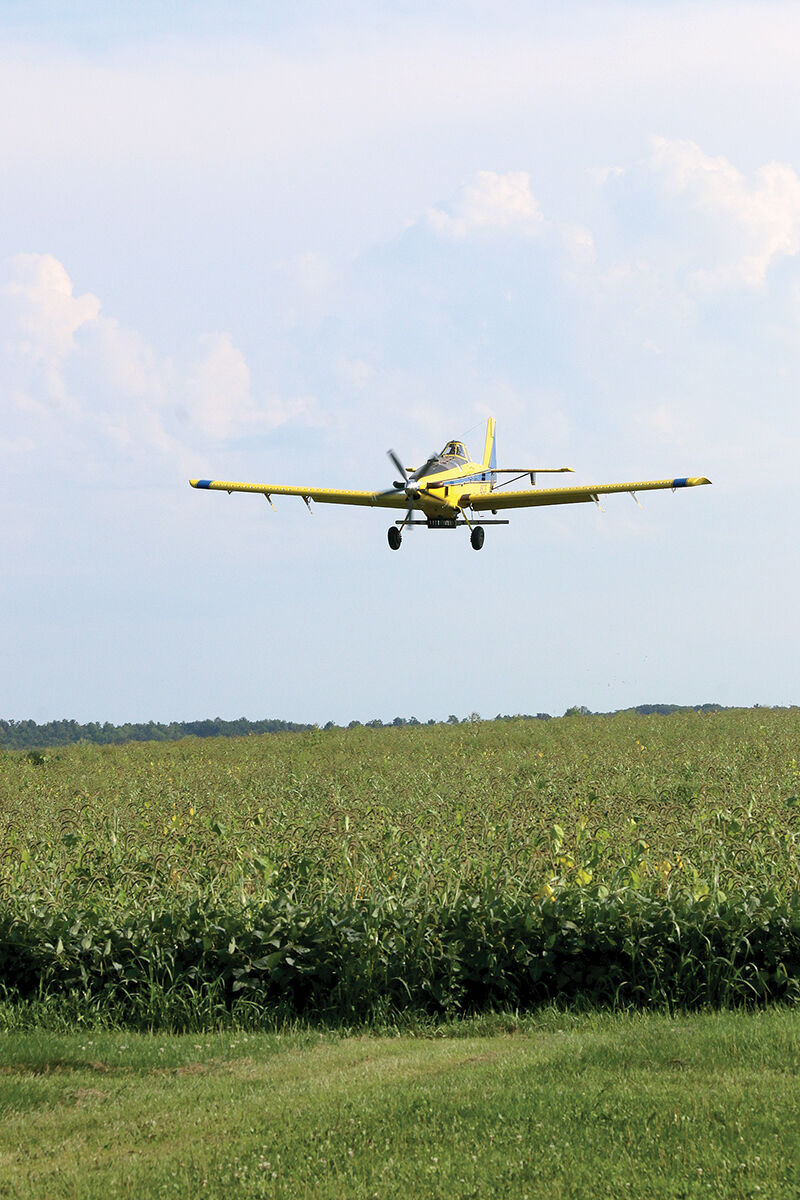 Damon Reabe, president of Dairyland Aviation, brings his Air Tractor AT-802A in for a landing at the Bloomer airport to take on more seed while planting cover crops in the Bloomer, Jim Falls and Chippewa Falls area. 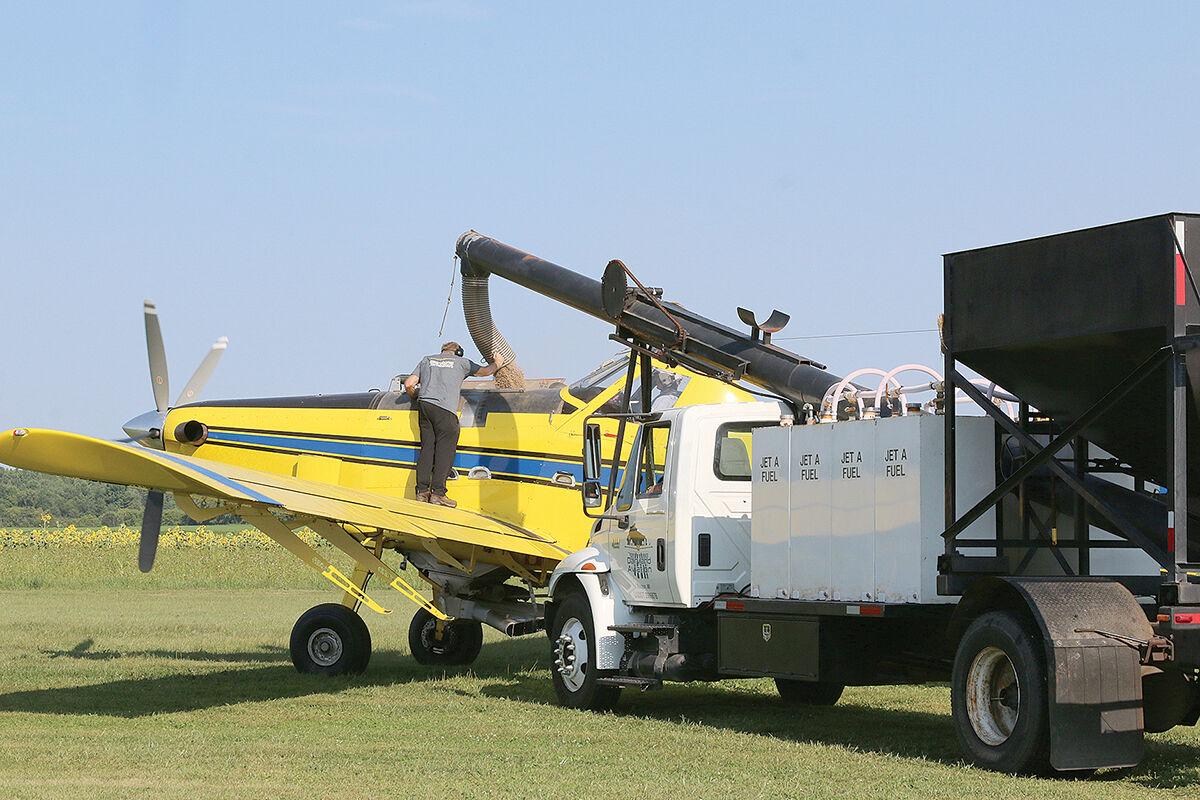 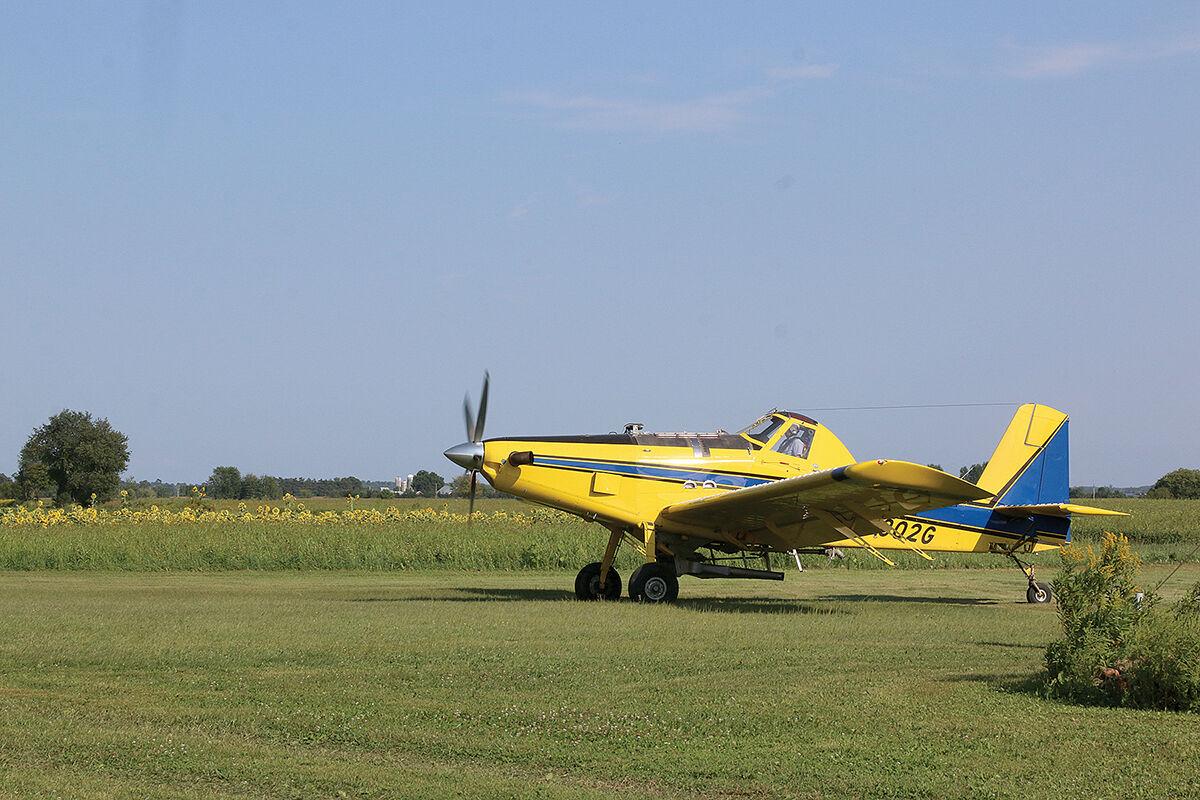 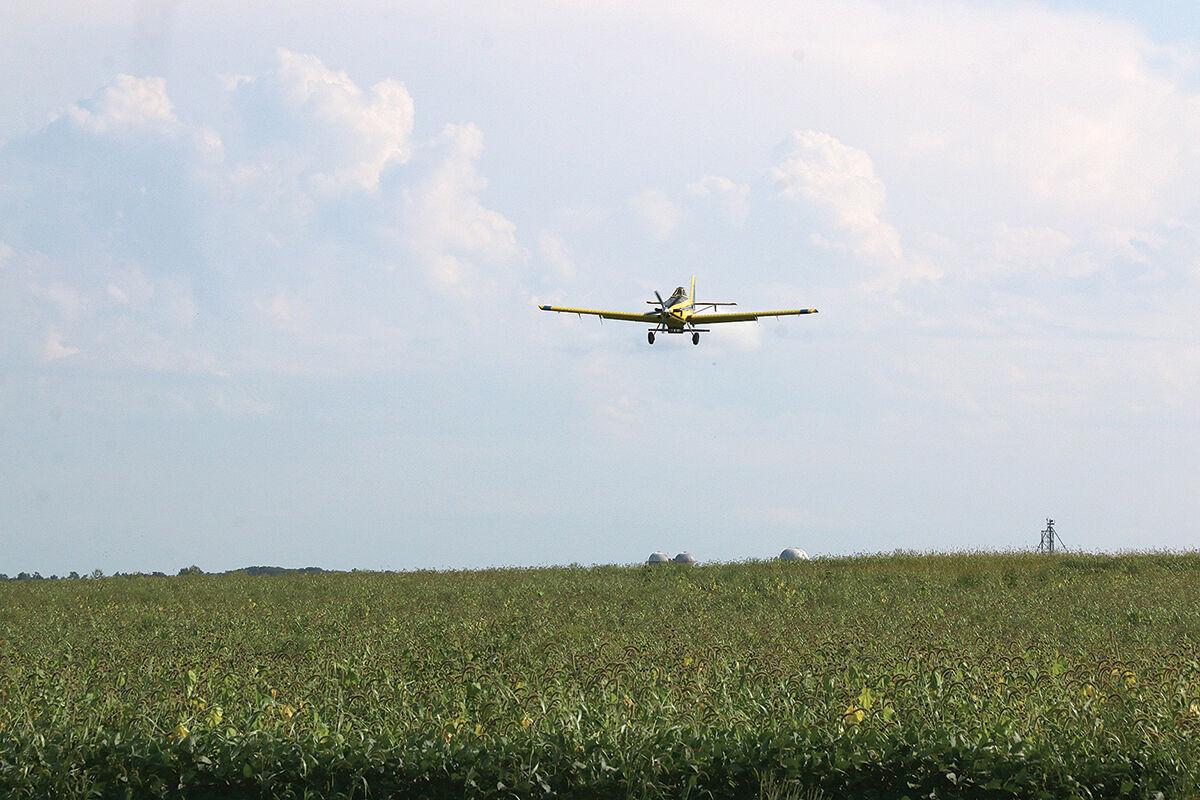 Damon Reabe, president of Dairyland Aviation, brings his Air Tractor AT-802A in for a landing at the Bloomer airport to take on more seed while planting cover crops in the Bloomer, Jim Falls and Chippewa Falls area.

On Thursday, Aug. 27, Bloomer residents may have noticed a bright yellow airplane flying over the city multiple times throughout the day. Dairyland Aviation was working out of the Bloomer airport to plant cover crops for four area farmers.

Damon Reabe, president of Dairyland Aviation and pilot of the plane on Thursday, said he was working with Seibel Organic Farms, Toni Fanetti, Fika Farms (by Jim Falls) and Wayne Bowe (down by Chippewa Falls). He said that he planted over 1,000 acres of cover crop that day. He was planting mostly cereal rye on standing corn and bean fields.

After the first rainfall after application, the seed will germinate and begin to grow and by harvest time there should be an established cover crop on the field. Cover cropping has consistently proven to benefit agriculture, communities and our environment by improving soil biology and properties, increasing water retention, reducing runoff and soil erosion, reducing soil compaction, storing nitrogen in the soil, helping with manure application retention and improving the water quality of lakes, streams and rivers near agricultural land.

According to Dairyland Aviation’s website, the advantage of broadcast seeding from the air is that it allows growers to cover more acres in less time. This allows them more flexibility when time and various weather conditions make planting stressful or simply unfeasible.

Seibel said, in addition to the benefits mentioned above, cover crops also help with weed control in their fields.

He went into more detail on Facebook, “We have been planting cover crops for the last 15 years, using a plane for the last six. We choose to use a plane on some fields because in this area we have such a short growing season and there is very little time to get the cover crop planted and established after harvest.

“When the current crops are starting to reach maturity, sunlight begins to make its way through the canopy to the soil surface. At this time we apply the cover crop into the standing corn and soybeans to help prevent soil erosion and keep a living root growing all year long to help feed microbial life, and enhance our soil biology. The practice of cover cropping is a long term investment in the soil and over the past few years we’ve begun to reap the benefits. We’ve seen better drought tolerance, faster crop maturation compared to the same variety planted in fields that cover cropping was not done with, and the ability to reduce our fertilizer needs.”

Dairyland Aviation’s aircraft are geared towards high volumes of acres and works with various groups of growers throughout the state to make applications efficient, ultimately reducing costs.

In the Bloomer area, Reabe said he’s been working with a group of progressive, conservation minded farmers from New Auburn down to Chippewa Falls. He said these farmers are concerned with environmental quality and soil and crop improvement. These farmers have worked with Dairyland Aviation experimenting with cover crop types and rates of application to maximize benefit and minimize cost.

Aerial Application By The Numbers

Reabe said his aircraft, an Air Tractor AT-802A, can hold up to 800 gallons or 85 bushels. It has a weight capacity of 6,400 lbs. While planting cover crops around Bloomer he was loading the plane with 4,500 lbs. of cover crop seed.

He said he was applying the seed at a rate of 100 lbs. per acre. Seibel said that it took between 4.5 and 5 hours for Reabe to plant 600 acres for them. Doing the math, Reabe was planting about 45 acres per trip and would have made 13.3 trips from the Bloomer airport to Seibel’s fields and back in five hours, which works out to about 22.5 minutes per trip. That’s 22.5 minutes to take off, fly to the field, plant 4,500 lbs. of seed (45 acres at 100 lbs. per acre), fly back to the airport, land, maneuver into place, fill the hopper and be ready to take off again.

Keeping track of where he’s already planted and where he needs to plant is all handled by GPS and computer programs. The truck that’s used to fill the plane has a scale on it so Reabe knows exactly how many pounds of seed have been loaded into his plane. He programs that information, along with how many pounds per acre into the on board computer which then controls the gate setting on the plane. Adjustments are made on the fly by the computer for variances in ground speed, which is approximately 160 miles per hour while planting.

Prior to planting day, farmers have sent Reabe maps of their fields that need planting and all other pertinent information needed to create a work order for the job. That information is uploaded to the plane.

When it’s all said and done, Reabe said he doesn’t deviate more than one to two feet from his intended course.

And, for those who are curious, the width of the swath of seed he’s applying is 80 feet at 100 lbs./acre.

Dairyland Aviation has three airplane and also applies fertilizer and crop protection products. Reabe is also the president of Reabe Spraying Service which operates five planes and one helicopter. For more information visit: www.dairylandaviation.com and www.reabesprayingservice.com.

Search Facebook for “Seibel’s Organic Meats, LLC” and check out their video of the aerial planting.