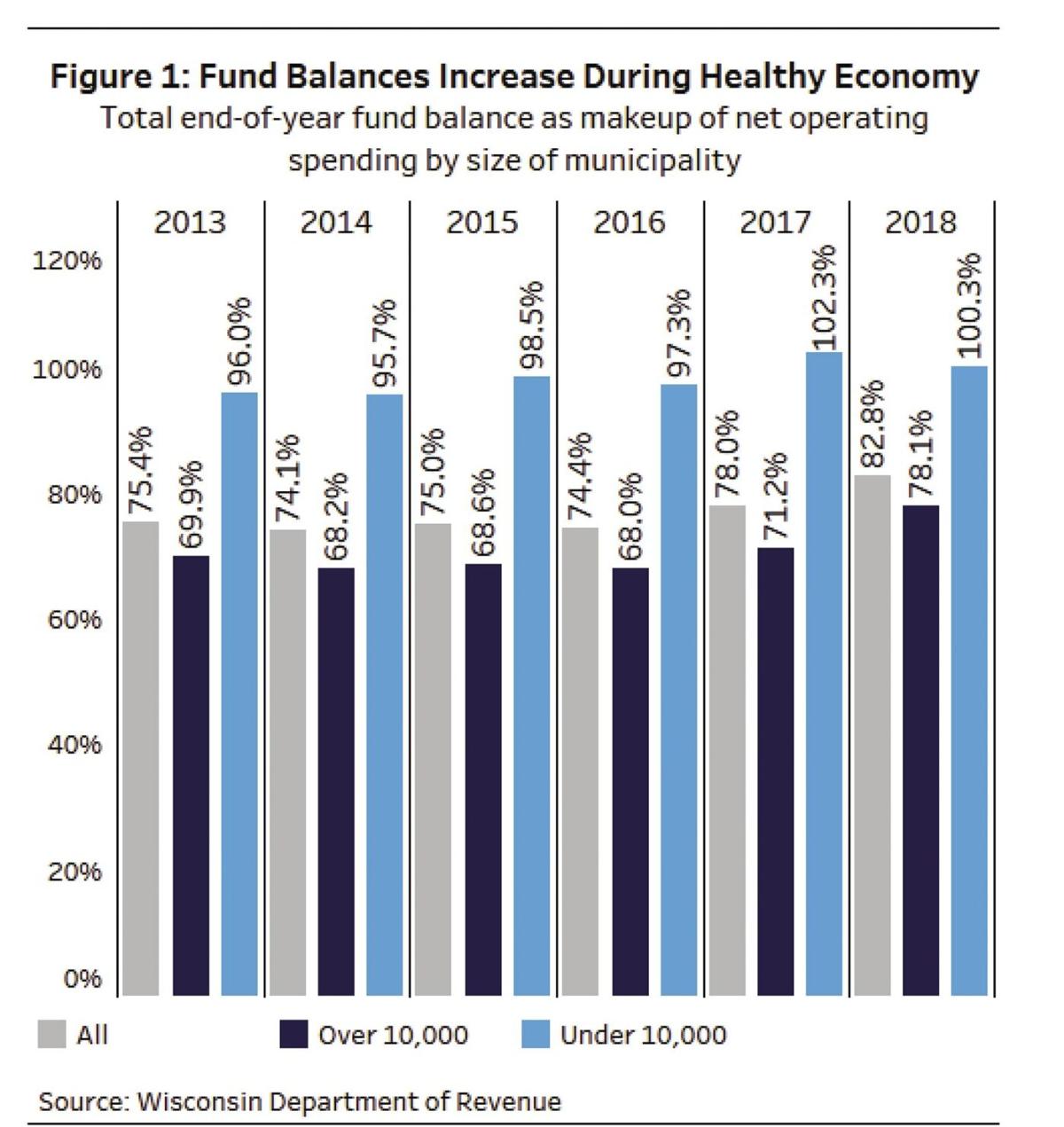 In the years preceding the coronavirus pandemic, a healthy economy allowed Wisconsin’s cities and villages to build up balances in their core funds. That’s good news, as such balances often are used to make debt payments, address pressing capital needs, limit short-term borrowing, or strengthen reserves to address unexpected revenue shortfalls or spending needs, such as those associated with COVID-19.

The end-of-year fund balances for the 541 Wisconsin cities and villages that consistently report such figures rose 24 percent from $2.79 billion in 2013 to $3.46 billion in 2018, according to data from the state Department of Revenue (DOR). The growth more than tripled the rate of inflation over those years and was enough to modestly boost the balances as a share of the municipalities’ annual spending on operations, as we explained in our recently published Municipal DataTool.

COVID-19 has transformed the picture for local governments, increasing public health and other costs while threatening key municipal revenue streams like room taxes, charges for services (such as parking), permit and licensing fees, fines, investment earnings, and state aid. Though property tax revenues will likely be more stable, the economic consequences stemming from the crisis may be long-lasting and additional federal aid appears uncertain at best. Municipalities with cash reserves may need to draw on them – one reason to look carefully at fund balances.

A municipality’s fund balance, however, should not be seen merely as cash on hand – it instead represents a fund’s assets minus its liabilities on a given date. For each city or village, the DOR data combine balances from several funds (general, debt service, capital projects and other) and combines those that are restricted for a specific purpose with unassigned reserves that are truly available to meet new needs. Consequently, while encouraging, the growth in fund balances for some municipalities may not translate into greater readiness to confront the fiscal impacts of the pandemic.

To explore those nuances, we also looked at the Comprehensive Annual Financial Reports (CAFRs) or similar documents from Wisconsin’s 10 largest cities. We found that unassigned general fund balances – a better metric of true reserves – have risen for some cities in recent years but have fallen for others such as Milwaukee, likely leaving those cities and their residents more vulnerable in the current crisis.

Cities and villages in every corner of the state grew their fund balances from 2013 to 2018, as total balances reached $3.46 billion by the end of 2018 (data for 2019 are not yet available). Excluded from this analysis are the 61 small municipalities (all have fewer than 1,300 residents) which at some point between 2013 and 2018 did not report fund balance data to DOR.

Again, these figures include all balances in the so-called governmental funds for these 541 cities and villages. The amounts can include receivables such as property taxes or state aid payments that are due to a municipality but not yet in hand. Other amounts might be inventory that cannot be spent; funds set aside for debt payments or construction projects; or gifts and grants made for a specific purpose.

As noted earlier, the DOR data do not allow us to isolate unassigned general fund balances – our preferred metric – as we were able to do for a recent report on school districts using Department of Public Instruction figures. Because of this, governmental fund balance data for any single community from year to year should be viewed with caution. Here, we choose to look at Wisconsin municipalities in the aggregate over several years, which may give a better sense of trends.

Twelve municipalities had end-of-year fund balances larger than $50 million. Most were large cities, though a notable exception was the village of Mount Pleasant with a 2018 year-end fund balance of $237.5 million, second-largest in the state only to Milwaukee ($245.0 million). However, a large portion of this was reserved for a tax increment district (TID) that houses the Foxconn development. Madison ($221.7 million) was the only other municipality with a fund balance larger than $100 million, and these three municipalities alone made up more than one out of every five fund balance dollars statewide.

To gain a better sense of the funds available to potentially ease the pain of the current pandemic, we looked at individual financial statements for the state’s 10 largest cities. From 2014 to 2018, only six grew their unassigned general fund balance. Total unassigned general funds dropped from $185.1 million in 2014 to $177.8 million in 2018, a decline of 4 percent.

This drop is mainly attributable to a 64 percent decline in Milwaukee’s unassigned balance, which topped $50 million in 2014 but declined to just over $18 million in 2018 amid significant fiscal challenges (for more, read our most recent budget brief on the city).

As a share of general fund spending, unassigned balances over the time span grew in Madison, Green Bay, Racine, Waukesha, Eau Claire, and Oshkosh, but fell in Milwaukee, Kenosha, Appleton, and Janesville (see Figure 2). In Milwaukee, by 2018, unassigned general fund balances represented just 2.4 percent of budgeted general fund spending – essentially, enough to run the city for about nine days. The remaining nine cities had reserves of at least 14 percent of general fund spending, and four of those (Oshkosh, Racine, Waukesha, and Eau Claire) had at least 25 percent. The Governmental Finance Officers Association (GFOA) recommends that municipalities at minimum retain an unrestricted general fund balance of two months’ – or about 17 percent – of revenues or expenditures.

It is certainly positive that municipalities were able to increase their fund balances in the healthy economic climate leading up to the current pandemic. Together with the relative stability of their property tax revenues, these funds may allow many cities and villages to avoid at least some of the cuts in staff or spending that otherwise may have resulted from the pandemic, at least in the short term.

As we have noted, however, significant proportions of these balances may not be available to offset new costs or lost revenues stemming from the coronavirus and its related economic impacts. And, even If they can be used, doing so could mean deferring capital projects or issuing higher levels of debt.

Still, it is encouraging that municipalities in general have built up fund balances. Those municipalities that have had both the financial advantages and the foresight to build their unassigned fund balances in particular will be better equipped to navigate the uncertain times ahead, though many will also need to take care to preserve some of their reserves for a prolonged recession or unknown future challenges.

Read the report online with interactive graphs at https://wispolicyforum.org/research/healthier-city-reserves-could-cushion-the-blow-of-covid-19/.