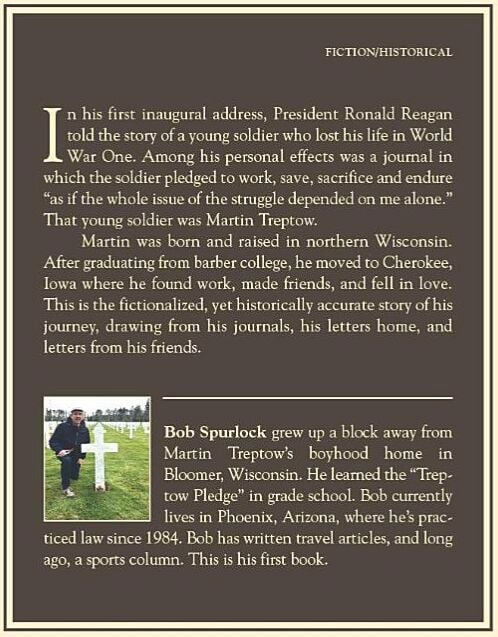 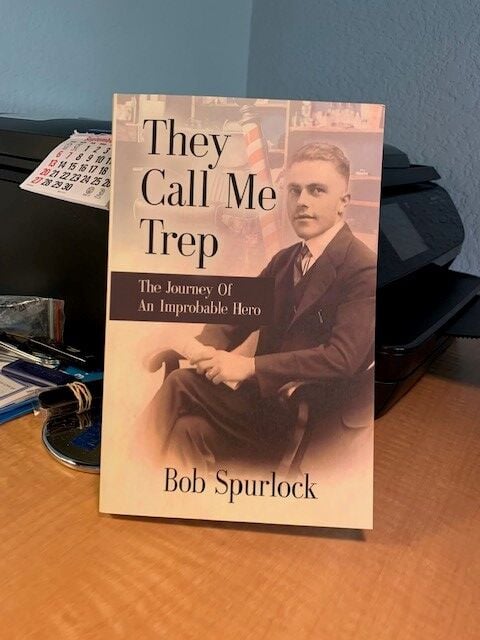 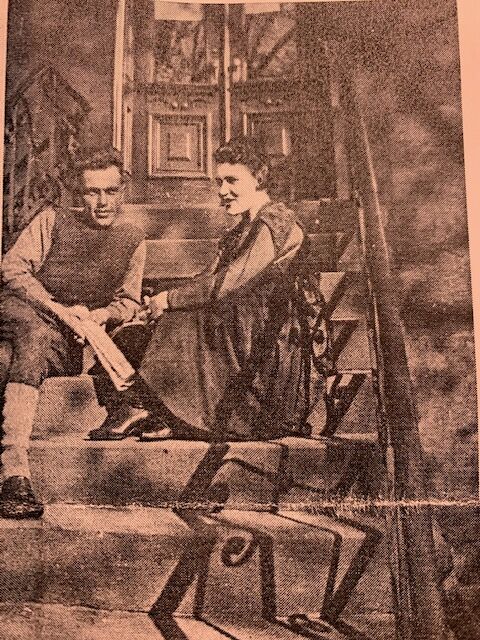 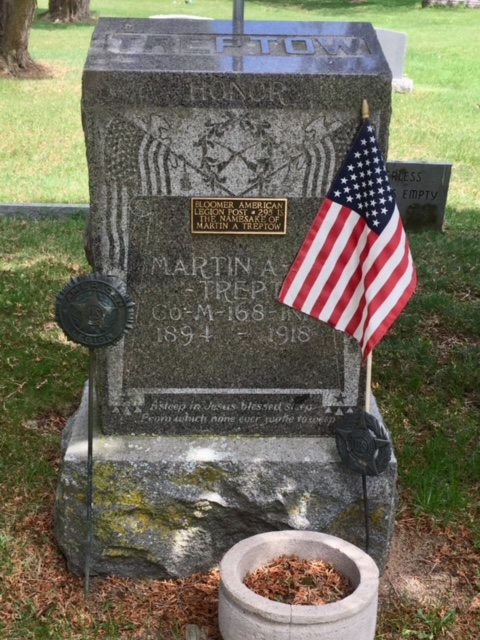 Robert Spurlock, formerly of Bloomer, has written his first book, an historical novel based on the life and death of World War I soldier Martin A. Treptow.

“In his first inaugural address, President Reagan spoke of a soldier killed in the First World War,” wrote Spurlock describing the book. “The young man kept a journal, in which he’d penned a vow to work, save, sacrifice and endure ‘and to do my utmost, as if the issue of the whole struggle depended on me alone.’ The ‘Soldier’s Pledge’ found its way onto a Liberty Bond Drive poster, but it was largely forgotten until the President’s 1981 speech.

“The young soldier was Martin Treptow. He grew up in northwest Wisconsin, first on a farm near Chippewa Falls, and then in Bloomer, where his parents built a home in the village,” wrote Spurlock. The Bloomer American Legion Post 295 bears Treptow’s name.

Spurlock, who grew up in Bloomer a block away from Treptow’s boyhood home, learned the “Treptow Pledge” in grade school. He later became interested in learning more about the man how wrote the pledge.

His quest to learn more about the young soldier led Spurlock to Cherokee, Iowa and to France (three times).

Treptow moved to Cherokee after graduating from barber college. In Cherokee he found work, made friends, fell in love, and eventually joined Company M of the 168th Iowa Infantry of the famed 42nd “Rainbow Division.” He was killed in France on July 28, 1918.

Spurlock said the community of Cherokee is big into history and preserving it and he found lots of help in Cherokee researching Treptow’s life. The newspaper in Cherokee was also a big help as were the people at the Sanford Museum.

He was also allowed, by Treptow relative Scott Roen, to view Treptow’s journals—there are two of them. Spurlock said he thinks Treptow may have kept the journals with the intention of writing a book after the war.

Somewhere along the way during Spurlock’s research of Martin A. Treptow he came to the decision to write his own book and chose to write an historical novel.

“I decided I could do more justice to the story if I filled in the gaps,” Spurlock told the Bloomer Advance in a phone interview.

In the description of the book on Amazon, Spurlock said, “They Call Me Trep is not a pure biography, however. Following President Reagan’s speech, that ground was well covered by The New York Times and other media outlets. While They Call Me Trep is chronologically accurate, and features real people, it also employs fictional elements to educate readers about life in the Upper Midwest at the turn of the century, and about the First World War. There are strong women in the story, and famous characters, but it’s neither a paean to political correctness, nor Forrest Gump 2.0. The women’s impressive personalities need no embellishment, and every encounter with a famous personage could have happened, and one almost certainly did.”

Spurlock told the Advance that one of the things he did to fill in the gaps was to recreate the relationship between Treptow and his girlfriend, Pearl. In doing so he had to contemplate how they could have met and where they might have gone on dates.

One thing Spurlock does know is that Pearl moved to Brooklyn to be closer to where Treptow was stationed before he shipped out to France. He also said that Pearl was quite a personality in her own right and that readers will get to know her in the story.

The storyline of “They Call Me Trep follows Martin from northern Wisconsin, to Iowa, to France, and back home to Bloomer. Several of Martin’s letters to friends in Cherokee are included, as well as excerpts from the journals he kept. There are photographs of the farm, his home in town, and Cherokee in the early 20th Century. There also are photographs of Martin and the woman he loved, and his unit in France,” said Spurlock.

Bloomer readers will recognize names and places in the story which concludes with a curtain call, which identifies the real historical characters, and provides another peek into their lives.

They Call Me Trep is available through Amazon, Booklocker, or Barnes & Noble.