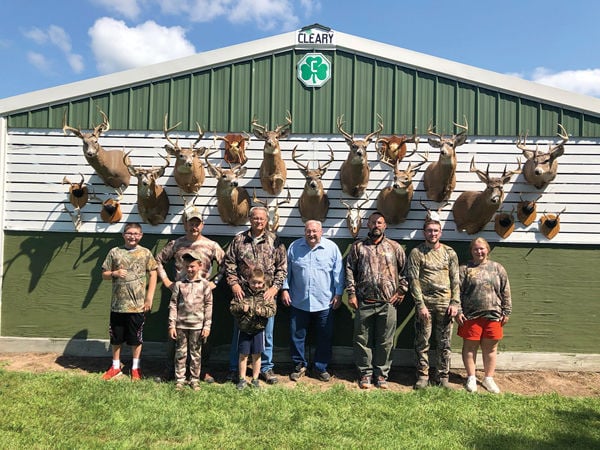 Richard “Dick” Nyhus, center, 90, of rural Bloomer, has been hunting since he was 7 years old. In those 83 years he has only missed one year—1952 when he was building a barn. This deer season Dick was joined by his son, grandsons, and great-grandchildren pictured in this photo taken earlier this year. From left, Zack Nyhus, Chris Nyhus, Max Nyhus (front), Ken Nyhus, Henry Nyhus (front), Dick Nyhus, Mike Nyhus, Blakley Nyhus, and Veronica Nyhus. 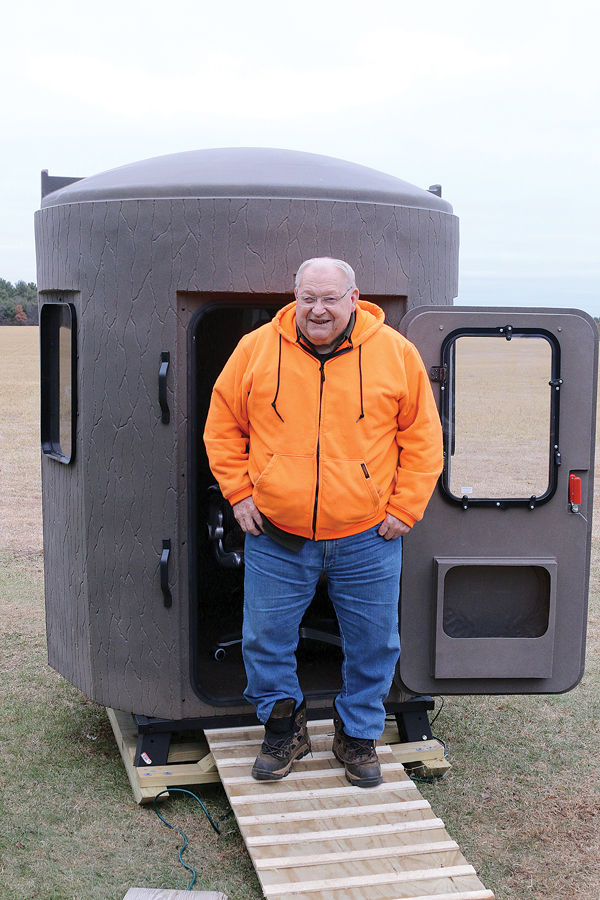 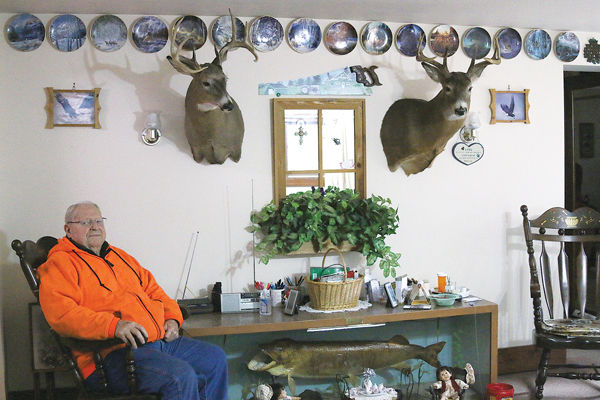 Richard “Dick” Nyhus sits beneath mounts of two of his favorite bucks that he shot during his 82 years of hunting.

Richard “Dick” Nyhus, center, 90, of rural Bloomer, has been hunting since he was 7 years old. In those 83 years he has only missed one year—1952 when he was building a barn. This deer season Dick was joined by his son, grandsons, and great-grandchildren pictured in this photo taken earlier this year. From left, Zack Nyhus, Chris Nyhus, Max Nyhus (front), Ken Nyhus, Henry Nyhus (front), Dick Nyhus, Mike Nyhus, Blakley Nyhus, and Veronica Nyhus.

Richard “Dick” Nyhus sits beneath mounts of two of his favorite bucks that he shot during his 82 years of hunting.

Growing up in Wisconsin, even if you’re not part of a hunting family, you hear stories of the 9-day gun dear season and the deer camps that go with it. Stories of families and friends gathering together hunting for that big buck and sharing good times together.

Located on the Nyhus family farm in Chippewa County, just south of Cornell Lake, is one such deer camp and Richard “Dick” Nyhus, 90, has been hunting there for the last 83 years. He started hunting with his father when he was 7 years old and has only missed one hunt in the last 83 years. That was in 1952 when he was building a barn and didn’t have time to hunt that year.

This year Dick—who has been married 70 years and has four children, 11 grandchildren and 19 great-grandchildren—enjoyed having four generations (including himself) of hunters hunting on the property and staying in the “deer camp” cabin. Deer camp for the Nyhus clan is across the road from the family home on the farm which has been in the family since 1902.

Dick said the farm sits on a master runway for deer that runs east-west across the property and there are a lot of deer that move along the runway. Dick and his son Ken said in the late 1970s and 1980s there would be 30 or 40 deer in the field by the cabin and another half dozen behind the house. Over the years Ken estimated they’ve harvested 100’s of deer off of the property. Dick said he’s not sure how many deer he’s shot, at least one per year his wife Donna said. Except when he was 7 Dick remembers, “Buck fever,” got him his first year hunting.

Over the years he’s seen a lot of changes. When Dick started hunting there wasn’t any clothing color requirement. According to the Wisconsin DNR website, in 1945 red was required, in 1951 orange was added to the red clothing law and in 1980 blaze orange clothing was required. In 2016 blaze pink was allowed as a legal hunting color and is the color of choice for Dick’s 15-year-old great-granddaughter Veronica, who shot her first buck this year.

Also, in the old days, Dick said, hunters did a lot more deer drives than they do now. Now, he said, people stand or sit around more waiting for the deer to come by. For Dick, who’s knees are showing the effects of years of concrete work, hunting from a blind is more a necessity than a choice. This year Dick is hunting from a factory made blind just a few yards from the cabin, but the property is home to many more stands and ground blinds, all with unique names. There’s the pail stand named that because of the blue and yellow 5 gallon pail Dick’s father carried out to the woods to sit on. The pail, now a rusty brown color, is still there sitting over a stump but it has been replaced by an enclosed stand. Other stands include, The Lake House, Field House (Dick’s new stand), Condo, Hideaway, Palace, Swamp Stand and Trailer to name a few. Most of the stands are heated and many have concrete floors, said Dick.

But, for the Nyhus family, like many others, it’s not just about the hunting, it’s about good times shared together. Dick said there’s too many good times to count and too many good memories of hunts gone by to pick a favorite. Dick remembers being in the woods hunting and hearing the children who were too young to hunt playing back at deer camp. Ken and Dick remember the laughter and good times around the table and the wood stove and the practical jokes like the rubber snake on a fish line that came slithering out from under someone’s pillow. “I swear he went straight up, screaming,” said Dick.

Ken said another favorite memory was when Dick was sitting in a blind with one of his grandsons and they hadn’t seen any deer. Dick picked up a pop can tab and asked his grandson if he’d ever seen his deer call? He then bent the pop tab up and proceed to say, “Here deer, here deer, here deer.” The two of them then looked up and six deer were standing in front of the deer stand but they both started laughing so hard they couldn’t shoot.

But, it’s not just in November that the family enjoys time at “deer camp.” Ken and his kids and grandkids spend lots of weekends in the summer at the cabin doing maintenance and shooting targets.

Veronica said the practice she did helped her out a lot in getting her buck this year.

Thinking back on all the years and all the good times, first with his dad, and then his kids, and grandkids and great-grandkids, Dick said, “It’s been a heck of a run.”